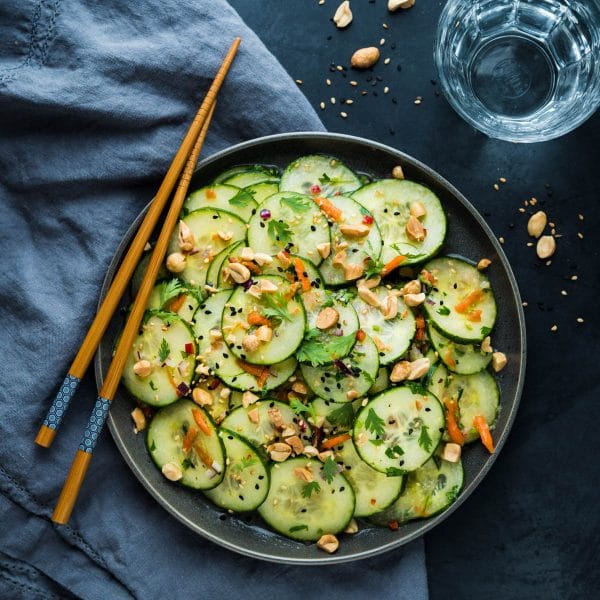 This quick and easy cucumber salad is a tasty side dish to a larger meal and can even be a light and healthy lunch on its own. This recipe is made with thinly sliced hothouse cucumbers, red onion, carrot, red chile pepper and cilantro with a tangy Asian style dressing. You’ll love the deep toasted flavor of sesame seeds and crunchy peanuts to garnish the Asian cucumber salad.

I love cucumber salads. They’re so light and fresh, but sometimes I crave a little more than just cucumber and vinaigrette. This Asian cucumber salad is layered and complex with lots of different flavors, colors and textures in every bite.

I like to make this recipe to serve with some of my favorite spicy dishes like this Asian Pulled Pork, or these not so spicy, baked Asian chicken thighs. The cool cucumber tames the sting of spicy food and emphasizes the oriental flavors of many Chinese, Japanese, Thai, Vietnamese and Korean dishes. It also goes great with simple pan fried pork chops or even a roast chicken.

Because we’re using hothouse or English cucumbers for this salad, there’s no need to peel them first. The skin is very thin (and edible)and the seeds are practically non-existent.

How to slice cucumbers for the Asian salad:

You can use a very sharp chef’s or Santoku knife to slice the cucumber — or use a mandoline for very even slices. Either way, you want the sliced veg to be very thin.

Cucumbers are made up of mostly water which can dilute the flavorful Asian dressing in this recipe, so I recommend salting the sliced cucumbers before assembling the salad.

Rice Vinegar is less acidic, sweeter and more mild than other distilled vinegars. It’s made by fermenting the sugars of rice into alcohol, and then further into vinegar.

Toasted Sesame Oil is made from roasted sesame seeds and has a deep sesame flavor. Unlike regular sesame oil, Toasted sesame oil has a rich, dark brown color and nutty aroma. Don’t confuse the two.

Fear not. In this cucumber salad, wasabi paste acts more as a flavor than a tongue tingling spice. It behaves subtly in the dressing and doesn’t overpower the Asian cucumber salad at all.

A word about wasabi. You may have tried “wasabi” paste to add sinus clearing heat to your California rolls, but believe it or not, it’s not the real thing.

The green tinged paste you find in most sushi restaurants is made with traditional European horseradish and food colorings. Son-of-a-gun…

Real wasabi is made from Japanese horseradish or Wasabia japonica, cultivated in Japan and is pretty expensive (about $200/kilo). (Don’t worry, you won’t pay nearly that much for a small tube).

I used the real deal Japanese wasabi,(I checked) for this Asian cucumber salad and it was perfect.

Can I use the wasabi wannabe in the Asian dressing?

I haven’t tried it with the other, but if you do, I’d start with half a teaspoon and add a little at a time, tasting along the way, to make sure your Asian dressing isn’t overly spicy.

How to make Asian dressing for cucumber salad

As you can see, assembling the salad is really simple, but here’s a key point — if you’re not going to eat the cucumber salad immediately, I’d advise not adding the dressing and garnish until just before you’re ready to serve.

Instead, cover the salad with a damp paper towel and refrigerate until you’re ready to serve. This will keep the cucumber and other veggies fresh and crispy until you dress it.

This salad is so vibrant, and eye-popping, I can’t get enough. The toasted sesame, wasabi, ginger and garlic give the cucumbers and veggie it’s distinctive Asian flavor and the chopped peanuts and sesame seeds add crunchy texture and nutty aromas to every bite.

Not long. It’s best enjoyed within an hour or two of making it. The leftover cucumber will lose it’s pertness and color and the peanuts and sesame seeds lose their crunch after a day or so in the dressing.

Can I make the cucumber salad in advance?

You can prep the veggies and salad dressing in advance, but wait until the last minute to combine them, so the veg doesn’t get soggy.

Can I use regular cucumbers for this salad?

It’s not my preferred choice, but if you do, peel the cucumbers with a vegetable peeler and slice it in half vertically. Scoop out the seeds and then thinly slice and salt the cucumber as described above.

What goes with Asian cucumber salad?

My husband loves this cucumber salad with a simple piece of baked salmon and white rice and spoon some of the Asian dressing over the fish and rice, like a sauce. Try it! 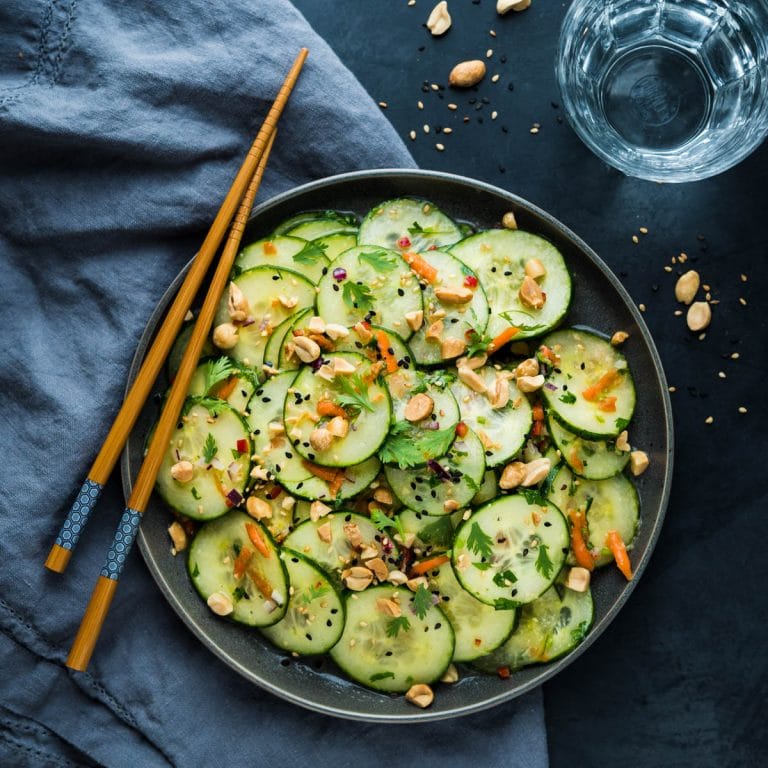 I serve this Asian Cucumber Salad when I’ve got something really spicy for the main course — the cool cucumber tames the fire and doesn’t fill you up — so you can keep going back for more hot stuff!
Course Side Dish
Cuisine Asian Inspired
Keyword asian, bread salad, cucumber, vegan
Prep Time 10 minutes
Total Time 10 minutes
Servings 4

FOR THE ASIAN DRESSING:

FOR THE CUCUMBER SALAD:

I like this salad as a cooling side dish for a spicy asian dish like Kung Pao or Sichuan.