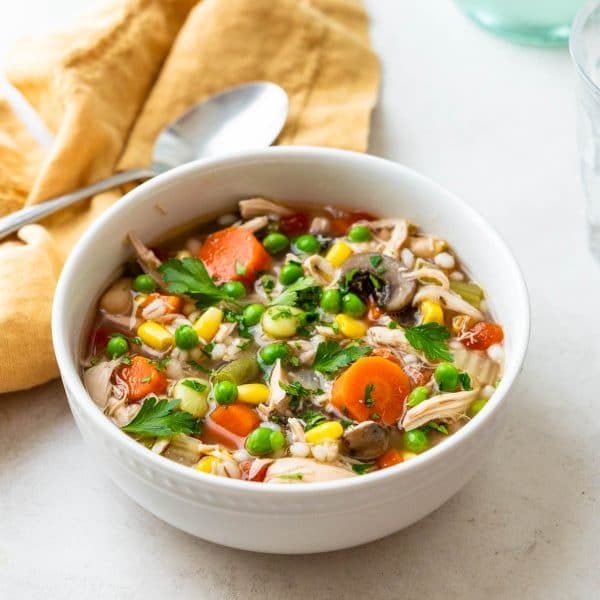 Barley Chicken and Vegetable Soup
This healthy chicken barley soup recipe is filling and delicious, with a simple homemade chicken stock from a whole fryer and a combination of fresh and frozen veggies for convenience. Cook the barley separately and add it at the end of cooking to prevent it from soaking up all of the chicken stock in this hearty chicken and vegetable soup.
Total: 2 hours 30 minutes
JUMP TO RECIPE PRINT RECIPE
Home | Recipes | Old Fashioned Chicken Barley Soup with Vegetables
65 shares

This old fashioned chicken barley soup with vegetables starts with a whole fryer to make a rich savory stock. Pull the meat from the chicken carcass for the soup and use fresh and frozen veggies to round it out. Cooked pearl barley is the perfect finishing touch for this hearty chicken vegetable soup. Kids love it!

Chicken soup is a universal favorite

There’s a reason that chicken soup is good for the soul. It makes you feel good from the inside out, it’s hearty, warm and soothing and kind of reminds me of a mother’s hug.

Chicken soup is popular all over the world, and every country has their own version, like this Greek-style chicken soup with lemon and feta. My friend Samantha at Little Ferraro Kitchen has a Persian chicken soup as well as a tasty Chicken Matzo Ball Soup that comes with a twist– saffron. And I love this Korean Chicken Soup and Thai Style Chicken Soup from fellow blogger Carmy from the website of the same name.

This homestyle chicken barley soup recipe is just like my grandmother used to make. She loved using barley in her homemade soups and I’ve shared several of those recipes here, like this beef barley and vegan mushroom barley soup.

This recipe starts with a simple, homemade chicken stock made from a whole fryer. The soup is loaded with fresh and frozen vegetables and toothsome, kernels of pearl barley that reminds me of her.

There’s more than one way to make homemade stock for chicken barley vegetable soup. Personally, I like using a dutch oven because it does a good job of maintaining a good simmer on the stove and it makes the house smell wonderful. If you don’t have one, you can also use a sturdy soup pot or use a slow cooker or pressure cooker. The methods are similar, but the steps are just a little bit different.

How to make stock in a pot or dutch oven for chicken barley soup:

How to make chicken stock in a slow cooker:

How to make chicken stock in an Instant Pot or pressure cooker:

Can I use the vegetables from the stock for the chicken barley vegetable soup ?

Personally, I discard the veggies after making the stock because they’ve cooked for a good long time and they get soft and lose their vibrance.

My husband has a problem with “mushy” vegetables, but if you don’t mind it, feel free to keep them…

One of my readers suggested pureeing the simmered vegetables in a food processor, then adding the puree back to the chicken barley soup to give it more body. I think that’s a fine idea!

Although if its your plan to use the vegetables (either whole or pureed), then I’d recommend tying the bay leaves and peppercorns in a cheese cloth before adding them to the pot for the initial simmer. This will make it easier to remove them from the homemade stock (they’re not edible) and you won’t have to strain the chicken broth.

If you’d like to take your time with this soup, feel free to make the chicken stock and pick the meat from the carcass one day and make the soup the next day (or a few days later).

After the chicken broth is made, this homemade barley chicken veggie soup can be assembled in about half an hour.

What type of barley to use in old fashioned chicken vegetable soup?

I generally use pearl barley for soups and salads. Pearl barley has had the tougher (and more nutritious) outer bran layer removed, leaving the polished kernels. Note: pearl barley isn’t considered a whole grain because of this treatment. You can certainly use hulled barley in the chicken vegetable soup, but it will take longer to cook.

If you can find “Instant Barley“, which generally cooks in about 10 minutes, add it straight to the pot without pre-cooking. It won’t soak up as much of the liquid as the uncooked hulled or pearled varieties and since it doesn’t take as long to cook it’s great for adding at the last minute.

If you don’t have barley on hand, feel free to substitute with another cooked grain(farro, quinoa, cracked wheat), or rice (white, brown or wild).

You can also swap the barley for pearl couscous, or other small pasta shapes like orzo, pastina or alphabets.

If you’re using very small pasta, you can add it directly to the soup without cooking. For larger shapes like bowtie, macaroni, or rotini, I recommend pre-cooking until it’s not-quite al-dente before adding to the soup to avoid it soaking up too much of the chicken stock.

What are the best vegetables to use for chicken vegetable soup with barley?

I use a combination of fresh, frozen and canned vegetables for this chicken barley soup, but other veggies will work well too.

Can I use store bought chicken broth?

If you don’t want to make your own chicken broth, you can use store-bought. For the chicken, you’d sauté chopped boneless, skinless chicken breasts, or thighs until opaque (not fully cooked through) and continue with the soup as directed for assembly. The final 15 minutes of simmer time will be enough to cook the chicken pieces through.

How long will chicken vegetable barley soup last in the fridge?

It’s best right after you make it, because the frozen vegetables will be bright and vibrant, but that doesn’t mean leftovers aren’t just as good. Keep the soup for up to a week in the refrigerator. The veggies will get a little duller in color, but the flavor is the same.

Can I freeze the soup?

Yes. Freeze the soup in individual containers for up to 3 months. Defrost before reheating.

Honestly, this homemade chicken barley soup recipe is a meal on its own with the savory broth, chunks of tender chicken, a rainbow of vegetables and nutty bites of barley. However, it’s also great with these accompaniments. 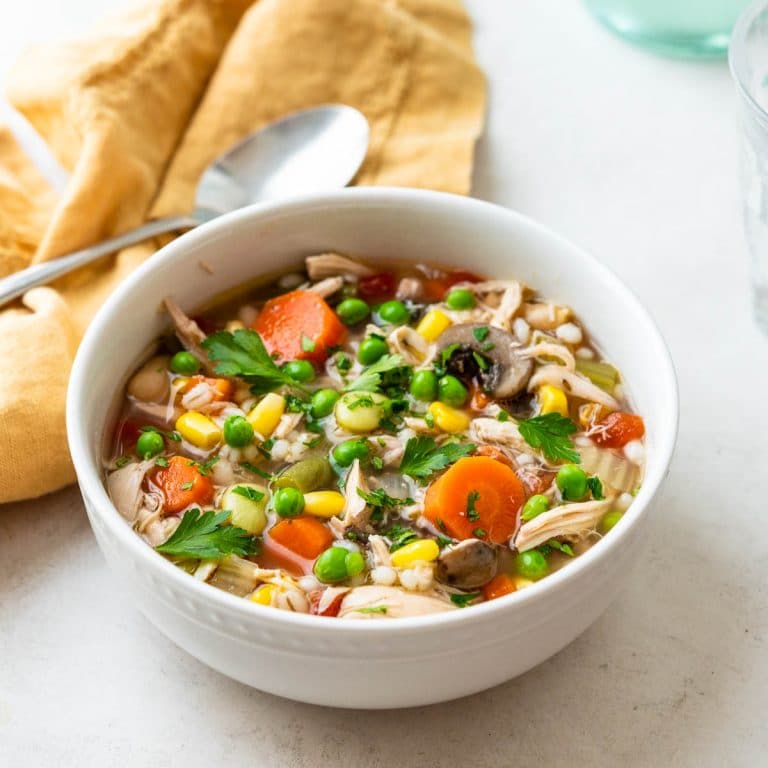 This healthy chicken barley soup recipe is filling and delicious, with a simple homemade chicken stock from a whole fryer and a combination of fresh and frozen veggies for convenience. Cook the barley separately and add it at the end of cooking to prevent it from soaking up all of the chicken stock in this hearty chicken and vegetable soup.
Course Main Course, Soup
Cuisine American
Keyword chicken soup, healthy soup
Dietary Restrictions Dairy-Free, Egg Free
Prep Time 30 minutes
Cook Time 2 hours
Total Time 2 hours 30 minutes
Servings 8

FOR THE CHICKEN STOCK

FOR THE CHICKEN VEGETABLE SOUP: