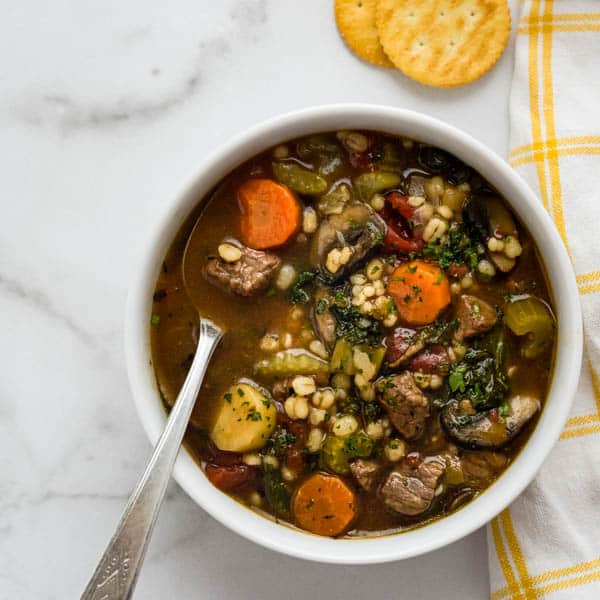 If you want a classic beef barley soup like grandma makes, THIS IS IT. Literally. My grandmother’s recipe. Old fashioned beef barley soup. Made from scratch right down to the fabulous, silky broth. It’s loaded with vegetables, button mushrooms, diced chunks of beef chuck roast and pearl barley for a beef barley vegetable soup that’s hearty and satisfying.  Simmering the barley with the soup, thickens the broth and gives this old fashioned vegetable beef soup more body.  This makes a BIG pot of soup that feeds a crowd. However, if you’ve got a small household, it also works great for weekly meal planning. 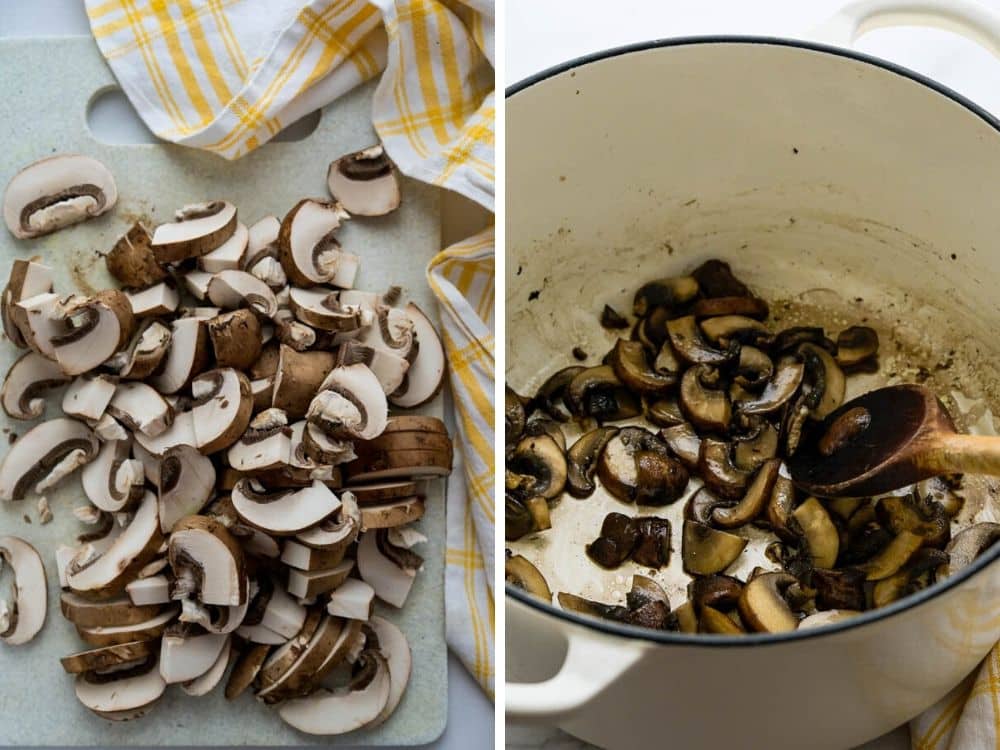 The ingredients for this classic soup are everyday staples that your pantry and refrigerator are probably already stocked with. Using store bought broth is fine, but if you can use homemade stock, I highly recommend it and this easy beef broth recipe won’t let you down. It’s simmered with real beef bones that add collagen to the broth, giving it that distinctive, velvety coating you’ll only find with homemade broth. That said I’ve always got a few cartons of store bought broth in the pantry, just in case… 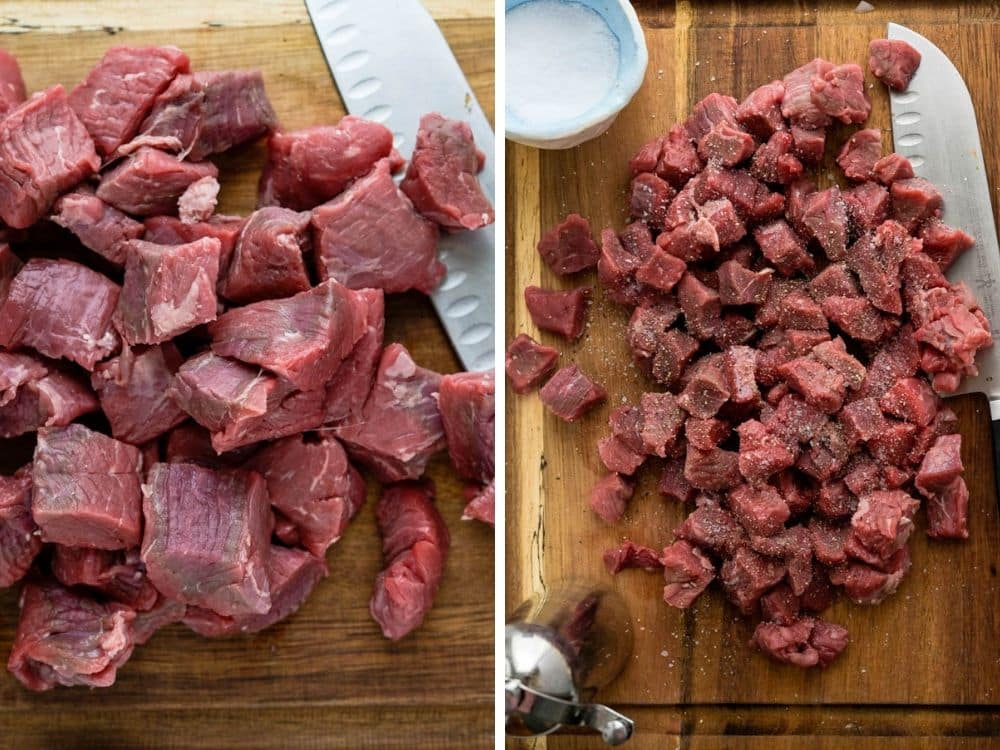 What’s the best cut of beef to use for old fashioned beef barley soup?

I recommend using beef chuck roast for this classic soup recipe because it has more connective tissue than other cuts. That connective tissue breaks down as the soup simmers, tenderizing the meat AND yielding more body (satiny mouth feel) to the soup. Chuck isn’t a cut you’d want to throw on a grill for 10 minutes, but in a soup or stew, a chuck roast (which comes from the shoulder of the animal) is the perfect choice. Bonus, it’s also less expensive than the traditional “tender” pieces like tenderloins that you’ll pay a premium for.

Other beef cuts to use for old-fashioned beef barley soup

It’s important to cut the beef into small chunks. Here, I’d actually purchased the chuck already cut for beef stew, but clearly those chunks were too big for soup. I cut the beef down further into 1/2″ pieces, so that they’d easily fit on a spoon (and into my mouth). You’ll also want to generously season the beef with salt and pepper before browning the meat, to help build layers of flavor. 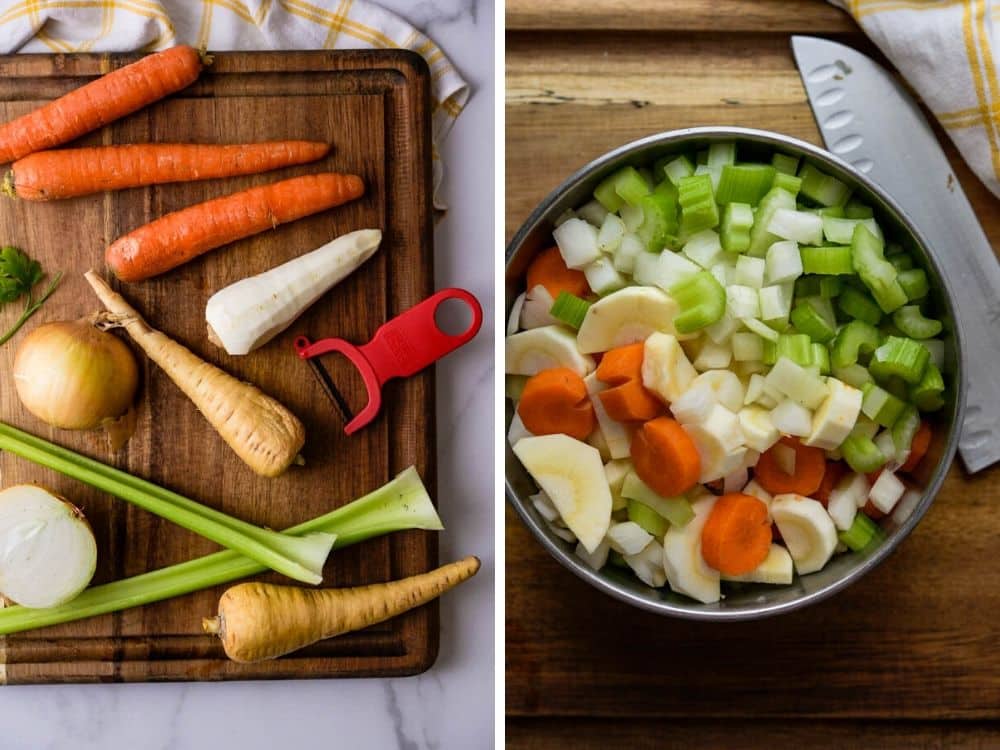 Onions, carrots and celery are the norm for any old fashioned soup recipe, but also try parsnips or turnips as they add an unexpected flavor. I didn’t have turnips here, but I did use parsnips which look like a white carrot and have a mild flavor, some say sweeter than a carrot. Personally, find the flavor to be very distinct. It’s vegetal without being overpowering.

When cutting the vegetables for a vegetable beef soup, I like to have chunks of carrot, celery and parsnip that are large enough to identify them in the bowl. Of course, they need to be small enough to fit in your mouth as well.  If you have a particularly fat carrot or parsnip, cut it in half lengthwise and then further cut it into 1/2″ moons, slicing crosswise. The bottoms of a celery stalk can get very wide, so chopping that portion into halves or even quarters might make sense. It helps to do all of the peeling, cutting and chopping before assembling the soup, that way everything comes together in quick order. 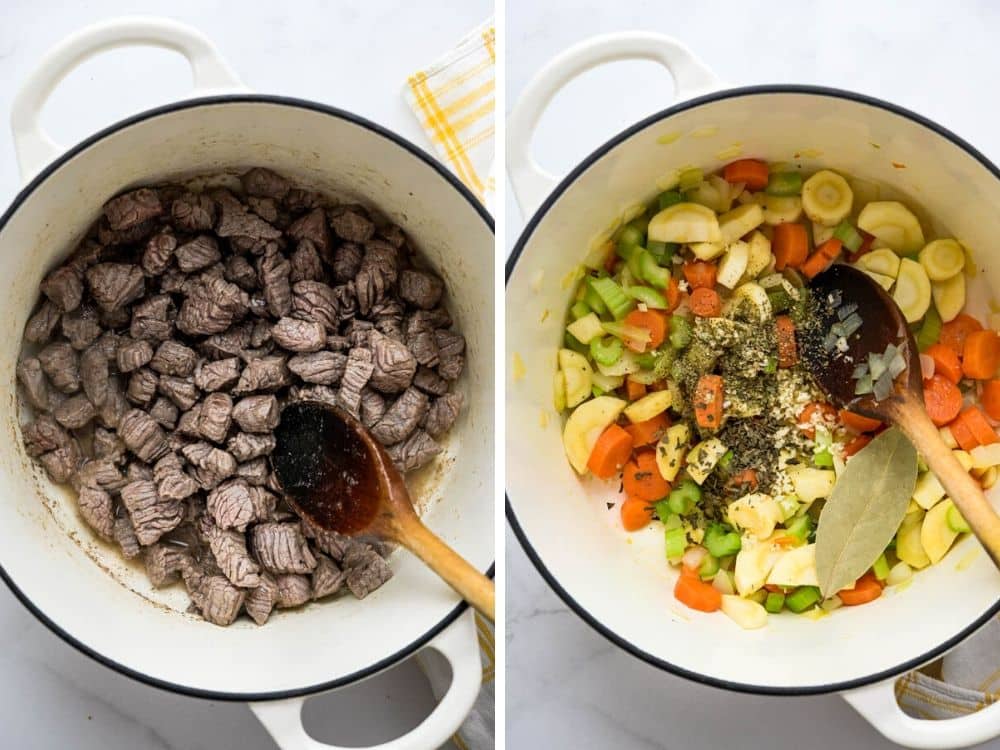 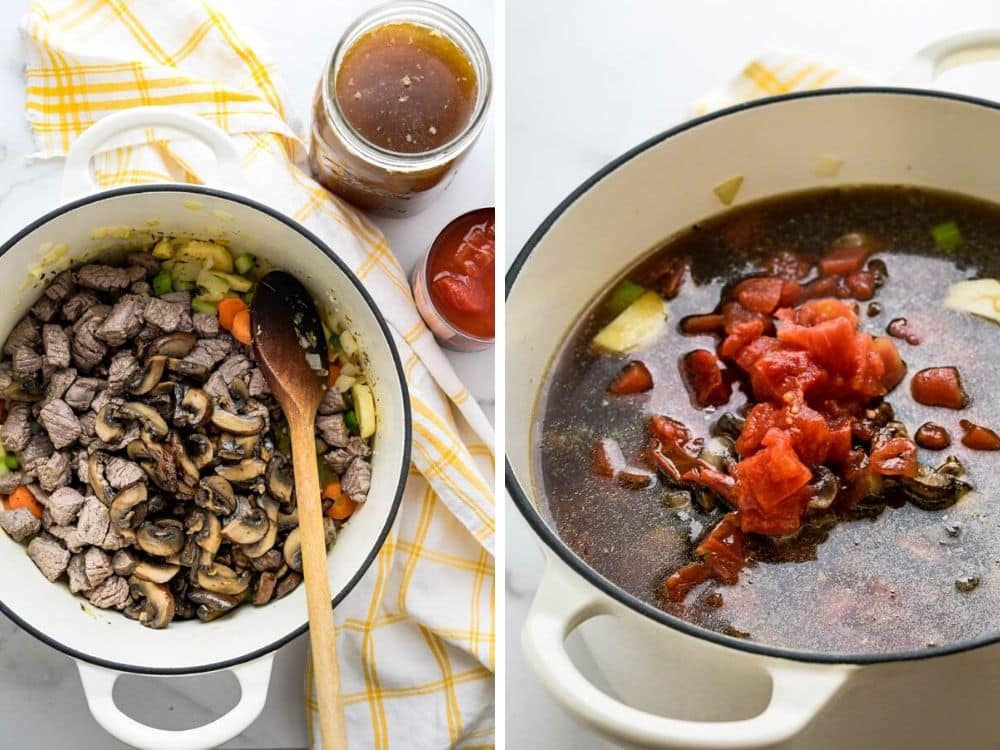 You may wonder about the can of diced tomatoes and why I use them.  It’s for that deep umami flavor that should be ever-present in and old fashioned beef soup. Aside from the beef (and beef broth) browned mushrooms and tomatoes add complexity and reinforce the rich umami flavor in the soup. Don’t skip it. 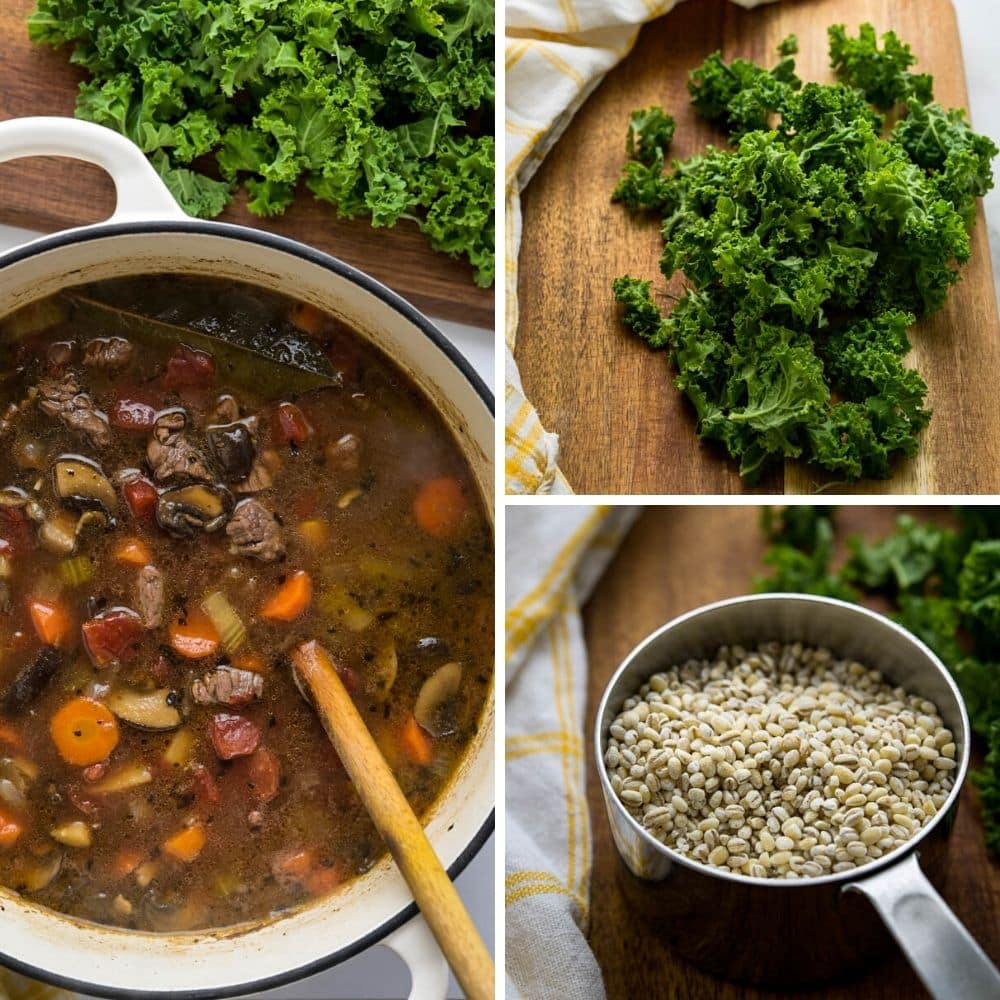 The difference between pearl barley and quick cook barley?

Pearl barley has had the outer bran layering and the hull removed, thus polished or pearled… Although its technically a refined grain, pearl barley is still more nutritious than other refined grains because some bran is still present in the grain and the fiber is distributed throughout the kernel.

Quick cooking barley is actually been cooked and dried, then rolled into a barley flake. As a result it’s a quick cooking grain that’s ready in about 10 minutes.

Which barley is best for soup?

You can use either one for beef and barley soup, but I prefer pearl barley.

Other alternatives to barley

Barley isn’t the only way to go here and thankfully, vegetable beef soup is very accommodating. You can also substitute the following grains, pastas, etc. for the barley, based on what you have on hand. 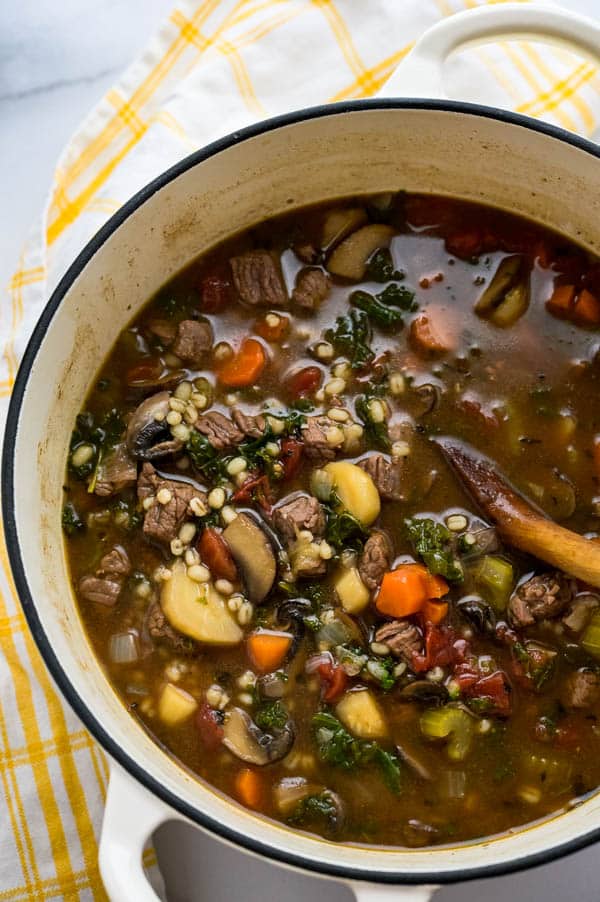 Now, THIS is the old fashioned beef barley soup my grandmother, Myne, used to make. I remember her big Farberware pot simmering on the stove, filled with this hearty soup. This was one of her go-to recipes when we’d visit and every time I make it now, I think of her. It’s meaty, rich and satisfying. Myne liked to serve her vegetable beef soup with popovers or her easy 3-ingredient drop biscuits for a delicious lunch or light dinner. Make a batch today and let me know how you like it. 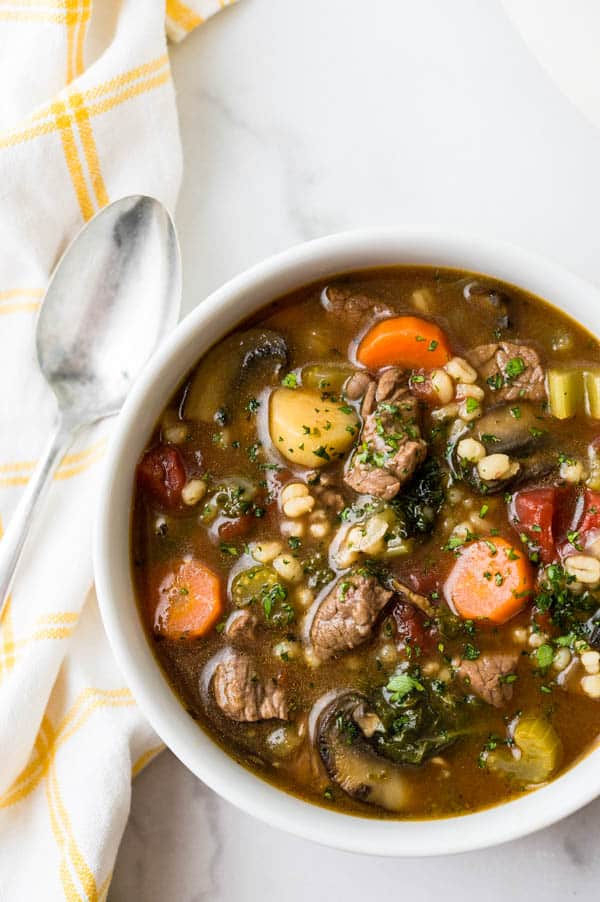 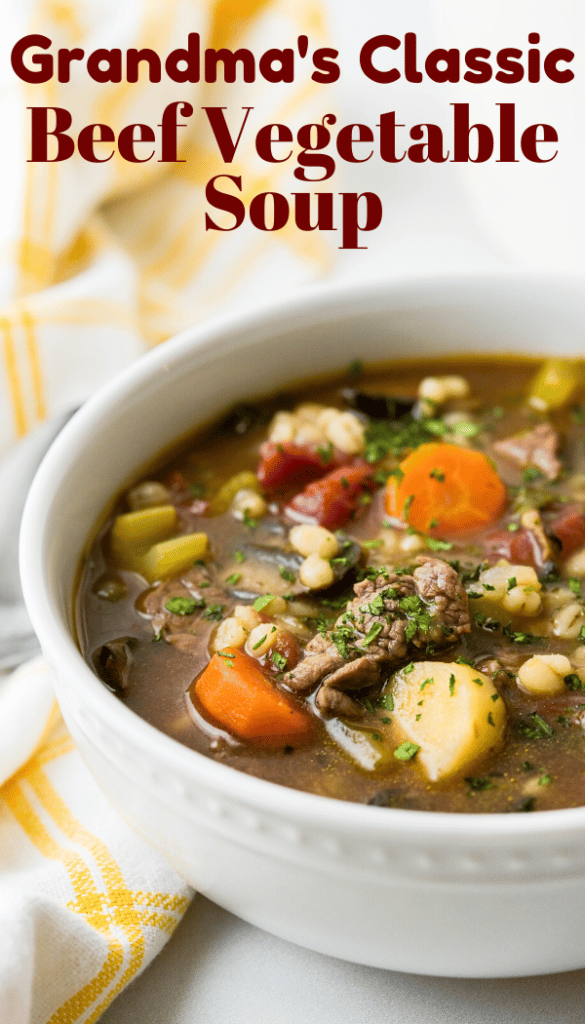