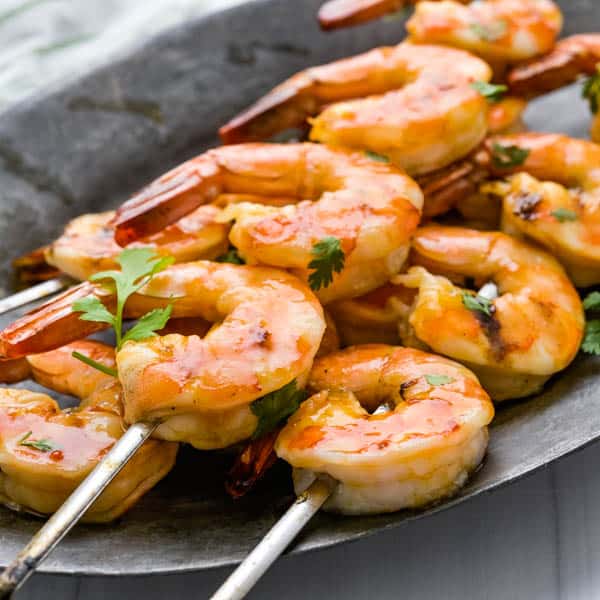 If you love glazed shrimp on the grill, stick around for this quick and easy recipe with homemade pineapple bourbon brown sugar glaze. Use the biggest, freshest shellfish you can find for this bourbon shrimp recipe and fire up the grill! You don’t need a fancy liquor for the bourbon glaze (a splash of Jim Beam will do) and this simple dish is ready to eat in about 20 minutes. Great served over white rice or mashed sweet potatoes.

This pineapple bourbon brown sugar glaze recipe is based on Steve Raichlen’s pineapple glaze and it’s a doozy. It’s sweet and tangy with a distinct bourbon flavor that’s good on everything from chicken, to pork and yes, these glorious glazed shrimp kebabs. His version lacks heat — something that my family craves, so I’ve added crushed red pepper flakes for that delightful tingle on the tongue. Skip it if you have an aversion.

What I love about this simple pineapple bourbon brown sugar glaze is that it’s made with pantry staples and it only takes a few minutes to assemble and cook.

There is nothing like freshly caught shrimp. It smells sweet, the flesh is firm and it “pops” when you bite into it. Use the freshest shrimp you can get for these bourbon glazed shrimp, preferably from your local fishmonger. Try to avoid frozen shrimp. It’s just not the same.

What size shrimp to use?

Large to Extra Large (U-12 to U-20 shrimp are best, but you can go as small as U-25). The reason you want large shrimp (aside from the eye popping looks) is because we’re kebabing the shellfish and if you’re shrimp are too small, it’ll be tough to get them on (and stay on) the skewers. Save your popcorn shrimp for another use.

What is a U-Count for seafood?

“U” stands for “under” which means that it takes a certain number or under of that item to equal one pound. The smaller the number, the BIGGER the seafood. So, U-10 would mean it would 10 or less shrimp to make a pound (that’s a BIG shrimp). This is also the way to determine the size of diver scallops.

With large shrimp like these, there’ll probably be a noticeable “vein” running down the length of the crustacean. Consequently, you’ll want to clean the shrimp before putting them on the skewers. Here’s how:

How to make shrimp kebabs (a.k.a. kabobs)

Now for the good part – grilling the pineapple bourbon glazed shrimp. It doesn’t take long at all, so pay attention!

Grill and glaze the bourbon shrimp

Despite their larger size, it won’t take these shellfish long to cook, so as soon as bourbon glazed shrimp are pink and firm, they’re done. Be sure not to overcook them, because you want them to be juicy and tender. Over cooking will make the shellfish, rubbery and dry.

Grilled and glazed shrimp is always a treat and when they’re lacquered with a sweet, tangy pineapple bourbon glaze, so much the better. This simple recipe is a standout. The bourbon glaze has layers of flavor, and the bourbon adds a noticeable warm, smoky flavor.

FOR THE PINEAPPLE BOURBON GLAZE:

FOR THE GRILLED SHRIMP KEBABS

FOR THE PINEAPPLE GLAZE