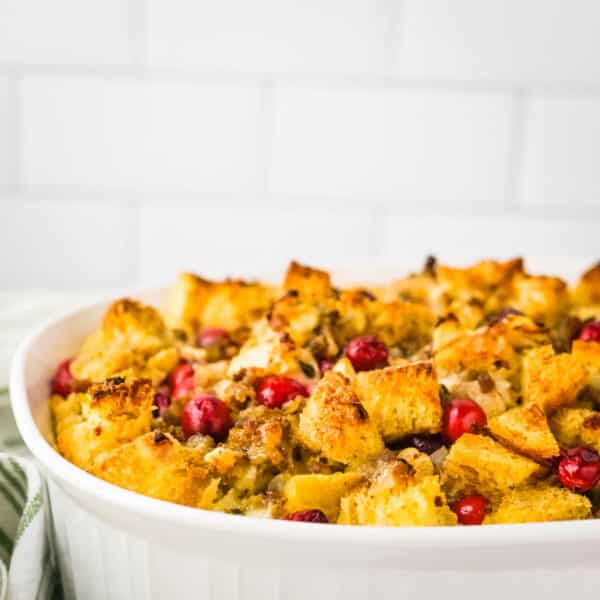 Looking for an easy, delicious baked oven french toast recipe that’s not too sweet? This is the answer. A sausage apple french toast that straddles the line between sweet and savory. It’s a great make ahead brunch idea for Christmas or whenever you have to feed a crowd.

Some people like sweet breakfast, others prefer savory. This easy make ahead oven french toast is the best of both worlds.

The idea came to me one year when I was making my traditional apple and sausage stuffing. I had the stale bread in one bowl and the combo of sausage and apples in another.

It reminded me of the brunch stratas that my Mom used to make at the holidays. I put the idea in my tickle file… and a few weeks later, I made it.

Of course, the recipe morphed because I had some seasonal cranberries at the ready — and I kept thinking that apples and cheddar cheese were another classic flavor combo…

You’ll love this make ahead brunch recipe for the Christmas holidays. Everything can be assembled the day before, then covered and refrigerated until french toast casserole is ready for the oven. (that’s my kind of no fuss breakfast).

How to make sweet and savory oven baked french toast:

Cheddar cheese and apples are one of my favorite pairings, however, in this oven french toast the cheddar cheese acts as a supporting cast member.

It’s not dominant and doesn’t become stringy or gooey in the oven baked french toast casserole.  Instead its like the exclamation point on the savory part of this recipe.

You can use any type of bread for the sausage apple french toast, but it’s best if it’s STALE.

I bought my loaf 2 days before assembling this breakfast strata to give it time to firm up. On the day I assembled the casserole, I trim the crusts from the bread and cut it into 1/2″ – 1″ pieces.

If your bread is fresh, not stale:

If you have a fresh loaf, you can cut it into small cubes and place it on a baking sheet. Bake it at 300°, for 30-40 minutes, stirring occasionally. This will dry out the bread and give it more structure.

Look for sturdy, hearty breads from the bakery such as:

This oven french toast recipe is open to many swaps and substitutions. You can make it according to what you have on hand and your own taste preferences.

The key parts are the bread and egg custard ratios.

Leftovers will last for 3-4 days and should be reheated in the oven to get that crusty top that makes this recipe so enticing.

Can I freeze the apple sausage strata?

You can freeze it after it has been baked, but I wouldn’t freeze it before cooking.

The top and edges will be crusty, toasted and delicious. The interior is soft and creamy (not soggy) because you use a sturdy, stale or toasted bread. Flimsy Wonder bread doesn’t work in this recipe. Use a good bakery loaf.

How does the sausage apple cranberry baked french toast taste?

In a word, it’s heavenly. It’s sweet and savory and very holiday-ish.

The sausage, cheddar and sage take this make ahead brunch recipe into savory territory, while the cinnamon spiced, lightly sweet egg custard gives it a decidedly sweet breakfast flavor.

You’ll love the crusty, puffed bread dome and the lush, creamy interior. Drizzling the oven-baked french toast with good maple syrup is a MUST.

The thing I like most about this make ahead apple french toast is that it’s already got sausage in it… So adding another breakfast meat would be redundant.

You don’t need any sweet rolls or coffee cakes because the sweetness is in there (especially when you add the maple syrup).

Essentially, this oven baked french toast is a meal in itself. But here’s a few ideas on what else will go with it.

What to serve with sweet savory strata: 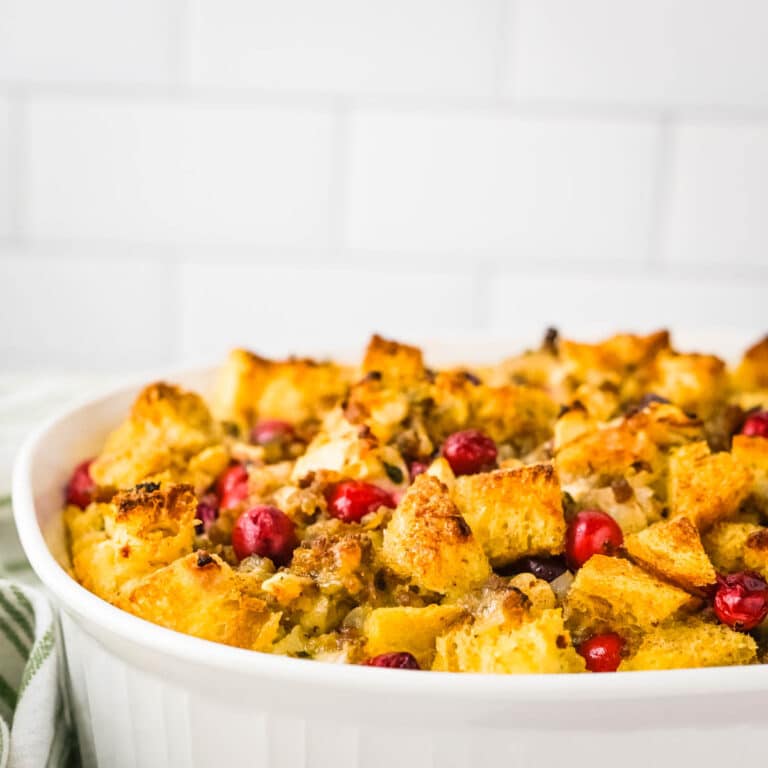