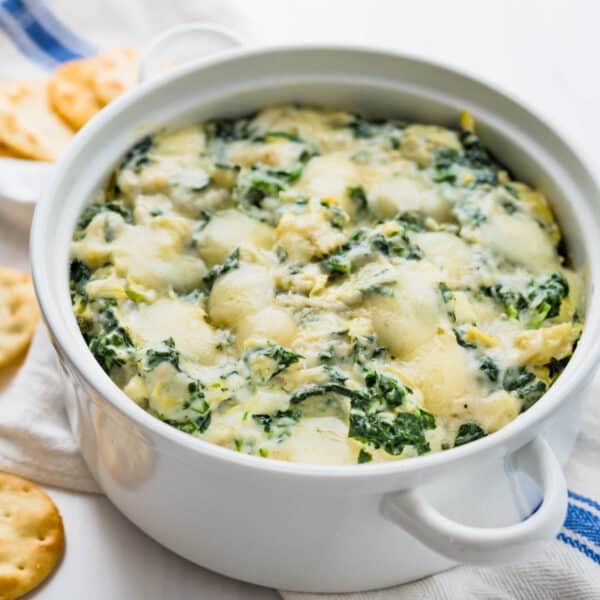 This is one of the best spinach artichoke dip recipes I’ve ever tried. It’s unlike any other because this easy baked spinach artichoke dip is made without mayonnaise, cream cheese or sour cream, but it’s every bit as rich and cheesy. Serve this cheesy baked artichoke spinach dip at your next get together and get ready for rave reviews.

One of my all time favorite guilty pleasures is a hot from the oven gooey, cheesy baked spinach artichoke dip. My response to seeing this hot artichoke spinach dip on a restaurant menu is immediate and visceral, negating any other appetizer options.

If you feel the same way, this spinach artichoke dip recipe is for you.

It’s based on the dreamy dip from Houston’s restaurant and it’s incredible. We have a Houston’s not far from our house and it’s long been a favorite spot for celebrating birthdays and special occasions. Their cheesy, baked, hot artichoke spinach dip is a must have every time we go.

Unlike other versions that use mayonnaise, cream cheese or sour cream, this easy spinach artichoke dip has no mayo, and skips both the cream cheese and sour cream for a completely different binder.

This dip tastes rich, but compared to those mayo, cream cheese bombs, it’s healthier in terms of calories and saturated fat. Let’s not forget, it’s full of veggies, too!

Is fresh or frozen spinach better for the spinach artichoke dip recipe?

That said, you’ll want to take the frozen spinach out of the freezer to thaw for several hours before starting this recipe. Do not thaw it in the microwave.

If you add thawed frozen spinach to the dip, it will be very watery.

Because the process food manufacturers take to freeze spinach involves the two steps I mentioned above. Consequently, frozen spinach has lots of extra liquid that would water down your dip.

So you’ll need to make sure to remove that excess liquid, by:

Should I use canned or frozen artichokes?

You can use either canned or frozen (and thawed) artichoke hearts for the warm spinach dip. Bear in mind that just as the spinach, you’ll want to dry the artichokes very well before using them in the recipe.

Most canned or frozen artichokes are sold whole or halved, so you’ll also need to chop them finely before adding them to the dip.

This easy baked spinach artichoke dip has no mayo, cream cheese or sour cream in the dip itself. Instead, the secret to this creamy blend is a simple white sauce (a.k.a. bechamel) made with a butter and flour roux and milk, cooked until thickened.

To give a plain white sauce more zip and flavor, it’s seasoned with salt, pepper, cayenne, and onion powder.

How to make spinach artichoke dip:

Best cheeses for baked spinach artichoke dip like a restaurant

To give that rich, cheesiness you expect in a hot artichoke and spinach dip, you’ll want to use a variety of cheeses. At Houston’s, they used freshly grated Parmigiano Reggiano and chunks of melty fontina, which is what I recommend.

However, if you don’t have these cheeses on hand, here are some swaps that work well too.

Use a lower heat for baking spinach artichoke dip

What makes this baked spinach artichoke dip so cheesy and delicious is the lower oven temperature (325° F), which melts the fontina and parmesan cheeses, but doesn’t brown them.

The cheeses actually melts into puddles of gooey, oozy deliciousness tucked between and around the tender spinach and artichoke hearts.

So what’s the best way to transport the baked spinach artichoke dip to your mouth? The possibilities are endless.

What chips are good with hot artichoke spinach dip?

I’ve made this dip countless times for everything from holiday parties to game day get togethers and the one constant is that EVERYONE loves it. It’s ultra creamy without being cloying or overly heavy.

The spinach and artichokes are bound by just the right balance of bechamel and cheese.

If you want more heat, you can increase the amount of cayenne pepper or serve it with a bottle of your favorite hot sauce on the side, so guests can doctor it themselves according to their tastes.

Most recipes for this warm dip are laden with cream cheese, mayo and sour cream PLUS cheese. This baked spinach artichoke dip has no mayo, cream cheese or sour cream and consequently the calorie and cholesterol count are much lower. I wouldn’t call it a health food, but it’s not the nutrition bomb of other recipes.

Can I prepare the spinach artichoke dip recipe in advance?

Yes. Assemble the dip and keep it covered and refrigerated for up to a day ahead of time. Remove the dip from the refrigerator about 30 minutes before baking it, or it will take longer to cook and melt the cheeses.

There are two easy ways to do this, either in the oven or microwave. To reheat in the oven, preheat to 325° and cover the dip with foil. Bake for 15-20 minutes until the cheese is melted. For the microwave, zap it in increments of 30 seconds until the dip is hot and gooey. 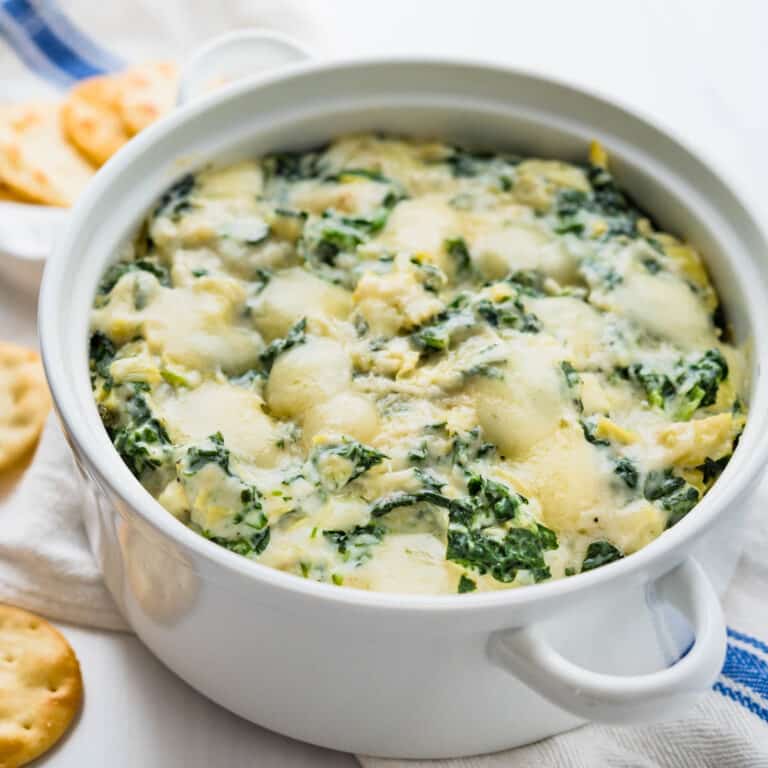 This restaurant-style baked spinach artichoke dip is warm, cheesy and delicious. This spinach artichoke dip recipe has no mayo or cream cheese, so it's a little healthier than most. Serve with sturdy crackers, crostini or veggie chips for an appetizer everyone loves.
Course Appetizer
Cuisine American
Prep Time 30 minutes
Cook Time 30 minutes
Total Time 1 hour
Servings 8