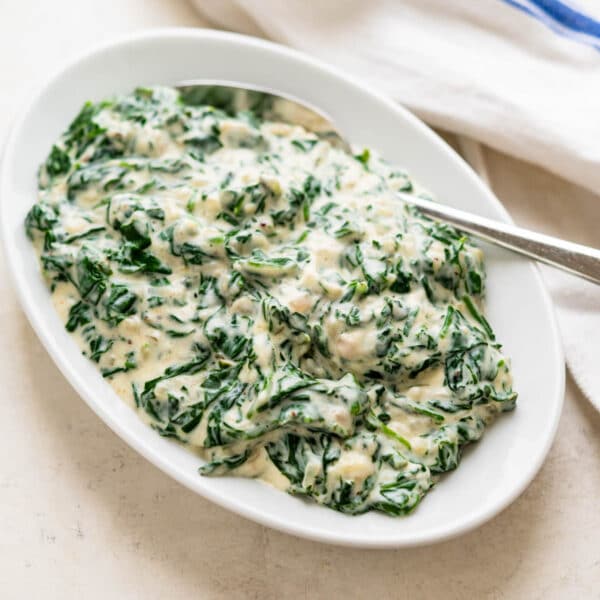 Steakhouse Creamed Spinach
If you want an ultra-creamy creamed spinach recipe, this steakhouse-style creamed spinach is the best. You can use fresh or frozen spinach for this luxurious side dish and don't forget the secret ingredient!
Total: 25 minutes
JUMP TO RECIPE PRINT RECIPE
Home | Recipes | Side Dishes | Creamed Spinach

If you love steakhouse creamed spinach, then you’ll love this rich, creamy creamed spinach recipe with a game changing secret ingredient. It’s easy to make and you can use fresh or frozen spinach for this simple spinach side dish.

Steaks are not the main draw for me at a steakhouse. Nope. I’m much more interested in the a la carte side dishes. A big plate of fresh steamed or roasted asparagus. Awesome steakhouse fries or scalloped potatoes, perfectly crisp tender broccoli or the ultimate wedge salad.

It’s the ultimate side dish. So luxurious. Sinful, even.

And it’s easier than you might think to make creamed spinach at home with this easy recipe and you’ll go gaga for my secret ingredient.

Which is best? Fresh or frozen spinach?

I like fresh spinach, but you can use either fresh or frozen spinach to make this creamed spinach recipe.

The only difference between fresh and frozen is that the frozen spinach has already been cooked (blanched) and then frozen, while the fresh spinach is, well… FRESH.

How to make creamed spinach with fresh or frozen spinach

Fresh spinach must be blanched and shocked before adding to the creamy white sauce. To do this:

Check out these tips on how to thaw frozen spinach.

How to make the white sauce for creamed spinach recipe

So, my secret ingredient is creamy Boursin herbed cheese. This distinctive cheese adds a richness and flavor to plain creamed spinach and elevates the recipe to steakhouse level.

If you don’t have any or if you don’t like Boursin (horror), you can also use freshly grated parmesan or pecorino romano.

For a basic creamed spinach, you can also skip the cheese altogether, but, come on… who wants BASIC?

Can I make this ahead of time?

You can blanch and shock the spinach (or defrost it if you’re using frozen spinach) ahead of time. I recommend making the white sauce and finishing the steakhouse creamed spinach just before serving for the best results.

Why do I need to squeeze the spinach dry before adding to the white sauce?

Both fresh and frozen spinach will water down the bechamel sauce too much if you don’t squeeze it dry first. Don’t skip this critical step.

How long will leftover creamed spinach last in the refrigerator?

Here’s the funny part. Even though this recipe calls for 1 pound of fresh spinach (which is equivalent to one package of frozen spinach), it doesn’t make a huge amount, so having leftovers usually isn’t an issue. This recipe will feed 2 hungry diners or 3 with smaller appetites. Any leftovers should be eaten within 2-3 days.

What goes with the creamed spinach recipe?

The easy answer is STEAK! But this creamy steakhouse style spinach goes with LOTS of things. 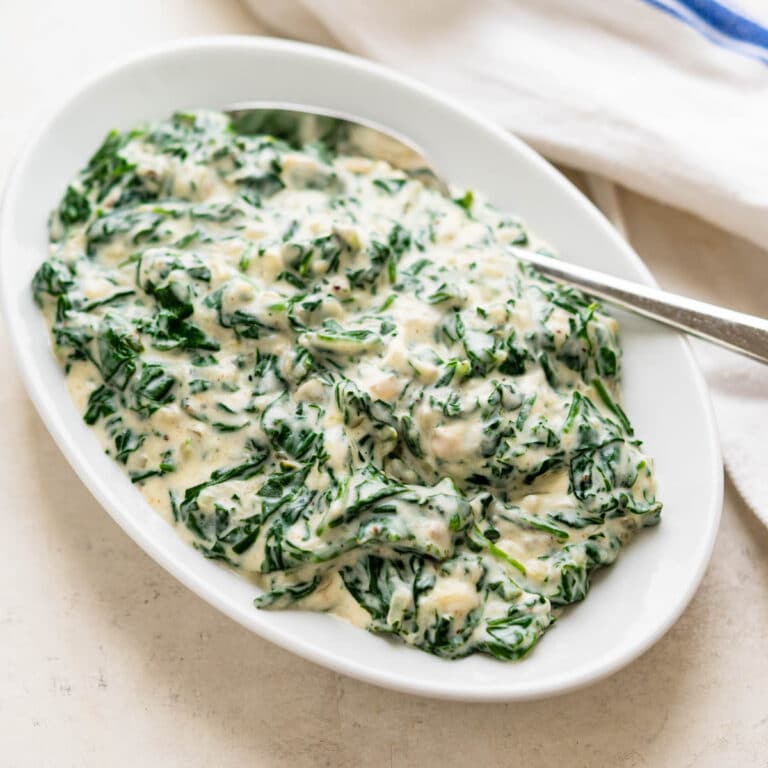