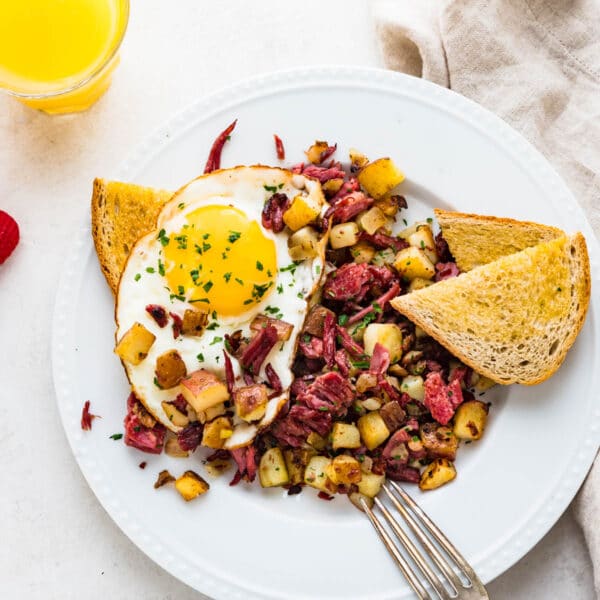 Traditional Corned Beef Hash and Eggs
Corned beef hash and eggs is a simple dish made from a handful of leftovers and pantry staples. Whenever you've got leftover corned beef, this hash and eggs recipe is a MUST MAKE. Best of all, it's ready to eat in about 30 minutes.
JUMP TO RECIPE PRINT RECIPE
Home | Recipes | Entrees | Meat | Beef | Traditional Corned Beef Hash and Eggs

Corned beef hash and eggs makes a hearty weekend breakfast or delicious “breakfast for dinner” idea. You’ll love this corned beef hash recipe because it’s a chunky blend of crispy potatoes and tender shredded corned beef (from a leftover brisket). The recipe is quick and easy and makes delicious hot, crispy hash that’s irresistible, especially with an oozy fried egg on top. If you’ve got 30 minutes, make some hash and eggs with leftover corned beef.

I’ve always been a fan of savory breakfasts and a good corned beef hash is always in my top 3 choices whenever we go out for brunch. But you don’t have to stand in line on a Sunday morning to enjoy corned beef hash and eggs. Make them (in your pajamas) at home in about 30 minutes.

Where did corned beef hash come from?

From the French word, “hacher” meaning “to chop” hash has always been a simple, efficient and delicious way to use up leftovers. Classic hash is made with chopped meat, fried onions and potatoes. It doesn’t get much simpler than that.

Breakfast hash has been popular in America since the 1800s with a myriad of hash recipes and the emergence of popular “hash houses” places that served up various types of hash and other diner-style favorites. However, hash is not strictly an American phenomenon.

In Denmark, “biksemad” (a.k.a. thrown together food) was traditionally made with pork, potatoes and onions, seasoned with worcestershire and topped with a fried egg.

In Austria, “Gröstl” is typically made from chopped leftover meat (sausage is common) with potatoes onions and herbs, topped with a fried egg.

Picadillo is a Spanish form of hash made with chopped meat made with tomatoes (or tomato sauce) vegetables and spices.

Germany has Labskaus made from corned beef minced with onions with boiled potatoes fried in lard, complete with the requisite fried egg on top.

There are countless other variations and one day I’m going to make it my mission to try each and every one, preferably in their country of origin.

This recipe is a traditional corned beef hash and eggs that you’ll find in diners across the U.S.

What you’ll need for homemade corned beef hash and eggs:

How to cook potatoes for corned beef hash:

Note: If potatoes are too moist, they’ll fall apart in the fry pan, so give them time to cool and for the steam to evaporate.

Best pan to cook hash in:

I like to use a good nonstick pan for frying potatoes, but a well seasoned cast iron skillet works well too.

You can also use a heavy bottomed stainless steel pan, sprayed well with vegetable spray before adding the oil (that’s just extra insurance that they don’t stick).

Pro-Tip: The key to frying potatoes is to make sure the pan and oil are hot (but not smoking) before you add the potatoes to the pan. A higher heat will quickly fry and brown the diced potatoes giving them a golden, crispy crust. However, adding par-cooked potatoes to a cold pan with oil allows them to soak up the fat instead of frying in it.

I have two corned beef recipes (so far) on this site and one of them is actually a legit beef brisket , that you brine for 5 days in the refrigerator and the other is an oven braised brisket made with a store-bought corned beef.

Try either of those preparations, or use a leftover corned beef from your St. Patrick’s Day celebrating.

Best way to cut the corned beef brisket for hash

I like to shred the meat for corned beef hash to give it more texture. The craggy shreds develop a great crust and fond when pan fried and are a nice contrast to the perfectly uniform spuds. Shred the meat with a fork, or use a pair of bbq “claws”.

You can also dice the corned beef into cubes (I admit, this is easier) that are roughly the same size as the potatoes. Just make sure the chunks of beef aren’t too large.

Good hash should be able to be scooped onto a fork, getting a little bit meat, potatoes and onions in each bite.

How to make crispy corned beef hash and eggs:

What’s the difference between scratch made corned beef hash and canned?

The first difference you’ll notice is in the appearance. The canned variety (as tasty as it is) resembles dog food. It ain’t pretty, whereas homemade corned beef hash has texture from big identifiable chunks of either diced or shredded corned beef and cubes of tender, golden potato.

Homemade hash isn’t a homogeneous mass, but rather an evenly assorted blend of separate ingredients.

Yes, you can fry the canned version so it takes on a crust, but homemade has crispy bites of potato and corned beef with rich, meaty bits of fond scraped up into the blend. No contest.

If you’ve got leftover corned beef (whether from a St. Patrick’s Day celebration or a traditional New England boiled dinner) you simply MUST make hash and eggs.

Can I use other types of meat to make this hash?

You can make hash with any cooked, leftover meat, like chicken, turkey, beef or pork.

Can I freeze hash?

Theoretically, yes, but it’s always going to be best when you make it fresh and all the bits are hot and crispy. Corned beef hash would lose its charm in the freezer.

Can I use frozen hash brown potatoes?

Yes. Defrost the potatoes and spread them on a paper towel lined sheet pan. Pat the diced potatoes dry before frying.

What to serve with corned beef hash recipe: 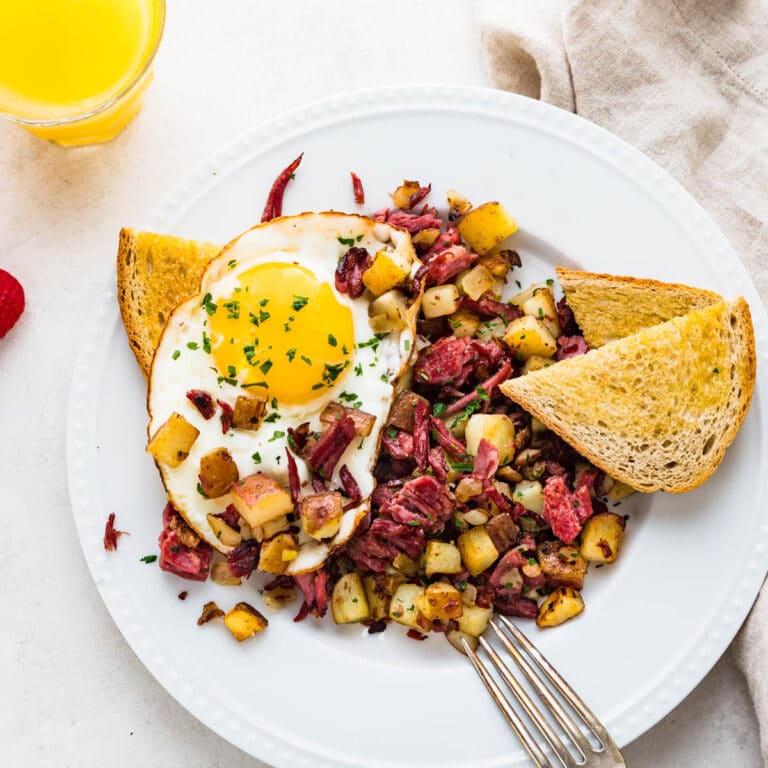 Corned beef hash and eggs is a simple dish made from a handful of leftovers and pantry staples. Whenever you've got leftover corned beef, this hash and eggs recipe is a MUST MAKE. Best of all, it's ready to eat in about 30 minutes.
Course Breakfast, Main Course
Cuisine American
Keyword corned beef, hash, potatoes
Dietary Restrictions Dairy-Free, Gluten-Free
Prep Time 15 minutes
Cook Time 30 minutes
Servings 2