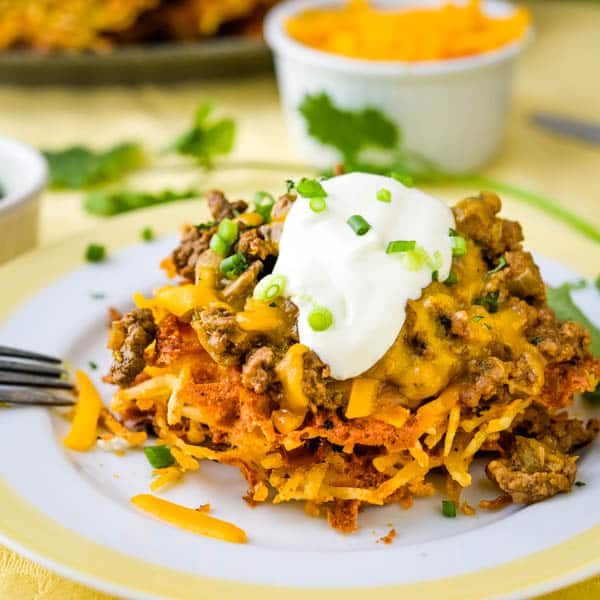 A big thanks to the sponsor of this post, Sprouts Farmers Market, where I purchased all of the ingredients for this recipe. All opinions are my own. #SproutsPartner #lovesprouts

Convenience reigns supreme for these easy Taco Hash Brown Waffles. Yes. Taco waffles! Think of them as dinner waffles minus the maple syrup. This easy recipe takes advantage of some convenience items like frozen shredded hash browns, canned chiles and taco seasoning for a crispy, savory frozen hash brown recipe that’s unlike any other AND it’s absolutely scrumptious. My tasters were too busy eating to actually speak, but the groans of delight were accolade enough.

Everything I needed for these easy, tasty dinner waffles came from my local Sprouts Farmers Market. I’ve been singing the praises of Sprouts for a while now and if you haven’t checked them out yet, put it on your to-do list. Why will you love it?

Plus, I found everything I needed for this loaded frozen hash brown recipe in one pass through the store, including the frozen organic hash browns. I’m telling you, CONVENIENT. Now about those taco waffles…

You’ll love this dinner waffles recipe because it only takes 10 ingredients and feeds a hungry group of four. Plus, with the ease of the pre-shredded frozen hash browns, the prep time is minimal. Bonus.

Thaw the frozen hash browns before starting the recipe. I usually transfer the package from the freezer to the refrigerator in the morning. By dinner time they’re perfectly thawed. Before you start cooking the hash brown waffles, it’s important to remove the excess liquid from them. They make look dry, but you’d be surprised. Lay a clean dish towel on the counter and spread the hash browns over it. Roll up the dish towel tightly and wring it out over the sink to remove as much excess moisture as possible. You don’t want to skip this step otherwise the hash browns might stick to your waffle maker.

Heat up your waffle maker before you start assembling the hash brown waffles, that way it’s ready to go as soon as you are.

How crispy are hash brown waffles?

SUPER-CRISPY. Seriously. One of my husband’s pet peeves is mushy hash browns. To him, if they don’t crackle in your mouth, they’re not worth the calories. These hash brown waffles are UBER-CRUNCHY. I even found him sneaking errant shreds of crispy potato from the edges as I was pulling them off the waffle iron. He found them as addictive as I did. The cheese and bit of taco seasoning added to the potatoes give these dinner waffles a hint of Mexican flavor without over-powering the crispy spuds.

What makes them taco waffles?

I’m glad you asked. Beyond the seasoning in the potatoes, I pile these hash brown waffles with a generous serving of taco seasoned ground beef with onions and chiles. Try to use real New Mexico Hatch chiles for this (you can find them in a 4 ounce can at Sprout’s), but other canned green chiles will do in a pinch. The ground beef mixture takes less than 10 minutes to assemble and it smells so good while it cooks.

Pile the hash brown waffles on a platter with the ground beef and taco toppings on the side for your diners to help themselves. This is a family style meal and great for casual, unfussy weeknight dinners.

You can go as spare or as decadent as you like for topping your Mexican inspired dinner waffles. For this batch, I kept it simple with just a bit of extra cheddar cheese, scallions, cilantro and sour cream crowning the chile-spiked beef. However, feel free to crown them with whatever else you deem delicious.

FOR THE HASHBROWN WAFFLES: