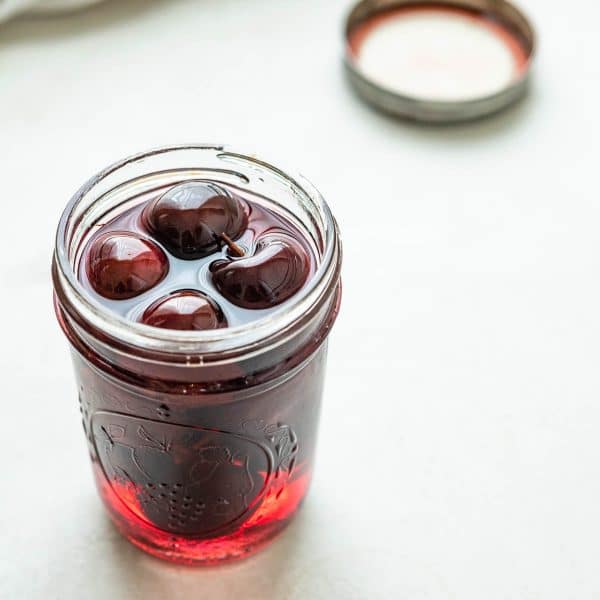 These easy to make drunken cherries are boozy and intense. Made with just 3 ingredients and 15 minutes of prep this simple pickling method infuses sweet cherries with vodka while simultaneously steeping the cherry’s flavor and ruby red hue into the spirits. They’re great for a tipsy snack or enhancing craft cocktails.

This post has been updated for photos and content since its original publication in 2015. The recipe hasn’t changed.

What are drunken cherries?

My friend, Nola, introduced me to the concept of soaking fruit in alcohol several years ago with this easy drunken cherries “recipe”. I use quotation marks because it’s less of a specific recipe and more loosey-goosey assembly. This is such an easy DIY to do at home and you won’t believe the results!

Sweet cherries, fortified with sugar and your favorite vodka make for awesome adult snacking. Put out a bowl of these cherries for snacking while you’re playing Euker with your friends and let the fun begin.

These cherries are POTENT and the longer they soak, the more soused they become.

Spiking summer fruit in order to preserve it isn’t a new concept. It’s been around since the 18th century and were known simply as “brandy fruits” to be served after a meal as dessert. Conversely, soaking fruit in alcohol and sugar also infuses the liquor with the flavor and aromas of the fruit making a tasty liquor that can also be sipped at the end of a meal, like a digestif. Italian limoncello is a prime example.

How to make boozy cherries

How much sugar, vodka and fruit do I need for drunken cherries ?

I haven’t specified the amount of cherries, vodka or sugar — for a reason. It all depends on the size of the jar you’re using. Let’s call it the “eyeball” method.

Place the boozy cherries in a cool, dark spot and wait. The longer they soak, the more infused the fruit becomes — and the more of the color will leach into the spirits, turning the vodka a deep crimson color.

I’m recommending at least a two week soak. It’s enough time to flavor the vodka and make the fruit taste like a cherry shot. Note, the cherries won’t be sweet — at least, not in the way you might be expecting. They’re more boozy than anything.

My friend, Nola, soaks her cherries in the vodka and sugar solution for 6 months. That means she makes them in July and doesn’t open her jars until Christmas. (In fact, she gives them as Christmas gifts).

The longer the fruit soaks, the more color is given up. In fact, I’ve let my drunken cherries stew in the back of my closet for the better part of 6 months and the fruit actually shrinks and turns a mottled grey-purplish color, while the vodka turns a dark ruby red. Though the drunken cherries don’t look like their former selves, they can still be eaten.

Where I live in South Florida, we don’t have bumper crops of fresh cherries, so my cherry choices are limited to sweet black cherries or Bing cherries. If you have broader availability, also try:

Everyone has their preferences from Smirnoff to Absolut, Grey Goose to Tito’s, so I recommend going with whatever brand of spirit you’re accustomed to sipping. I used Tito’s for this batch.

Do I need to refrigerate the drunken cherries?

I get this question A LOT. People are naturally skittish about letting fresh fruit sit at room temperature — especially for weeks or months at a time. I get it.

Keep in mind that these cherries are covered in two ingredients that are specifically used for preserving foods… Sugar and alcohol (a third preservative is salt). Using alcohol that’s at least 40 proof will ensure that the cherries don’t spoil.

I found a related response to that question on ChowHound in an article titled Brandied Cherries Mishap? and thought it appropriate to share with you.

“Nonsense to the naysayers. They don’t need to be refrigerated. You are not going to get ANY bacterial growth in bourbon (or vodka)*. 40% alcohol is enough to kill any bacteria or funghi (I work with microbiologists). They are perfectly safe to eat as well. That said, they will lose some of their natural color. Which is why commercial cherries, even the fancy Italian ones, are always died a dark color. The alcohol alone leaches out the color even on red cherries, though they still taste great.”

Heck, pop one in your mouth. If it tastes even slightly bad (it won’t) spit it out.

The fridge won’t hurt them either, if it makes you feel better.

You don’t have to worry so much about sterile jars. This ain’t jam or pickles, it’s booze. Nothing bad could survive in there.

Can I use other types of fruit?

Yes! Try this with peaches, apricots blueberries, pineapple or other types of fresh fruit.

Can I use other types of alcohol?

Can I use frozen cherries?

Theoretically, you could, but I wouldn’t recommend it. Frozen cherries have already been through one transformation (freezing) and they aren’t as firm as fresh, ripe fruit. If you do use frozen cherries, I’d go with a shorter soak time (up to 2 weeks) and enjoy them sooner.

Why did my cherries turn colors?

The longer the cherries soak, the more purplish gray they become. They’re still fine to eat.

After just two weeks, these drunken cherries are happily infused with the vodka. They’re not overly sweet, but they do have a bit of tacky syrupy film that settles over them. You can eat these cherries out of hand or use them in some outta-bounds cocktails.

I have a few ideas on that front… coming soon. In the meantime, grab some fresh cherries and get them soaking now. 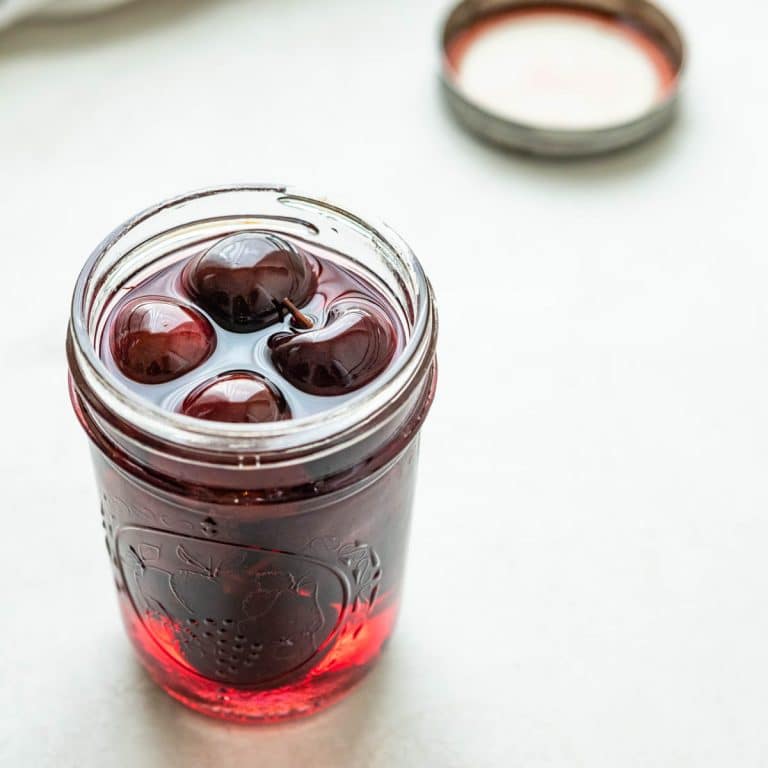