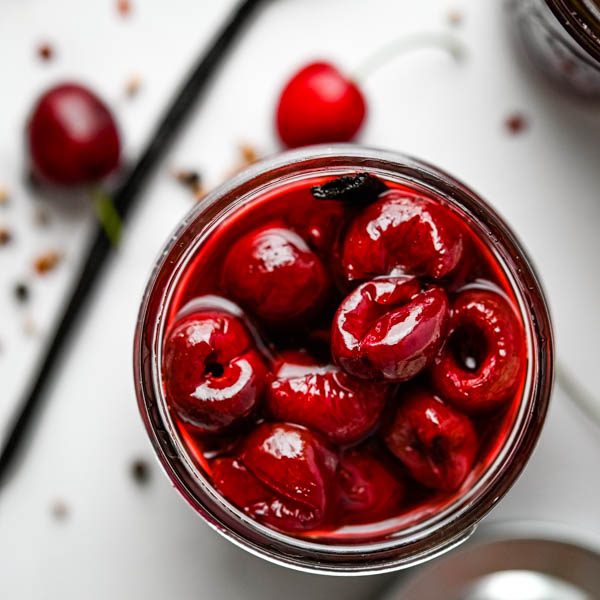 If you love bing cherries but thought they were only for dessert, think again! These amazing pickled cherries have a tart-spicy kick mellowed with warm vanilla bean that you’re gonna love. This pickled fruit is great in cocktails, delicious with a cheese board or charcuterie platter, a natural with pork, chicken or lamb and phenomenal when added to salads. Definitely not a one-trick pony. 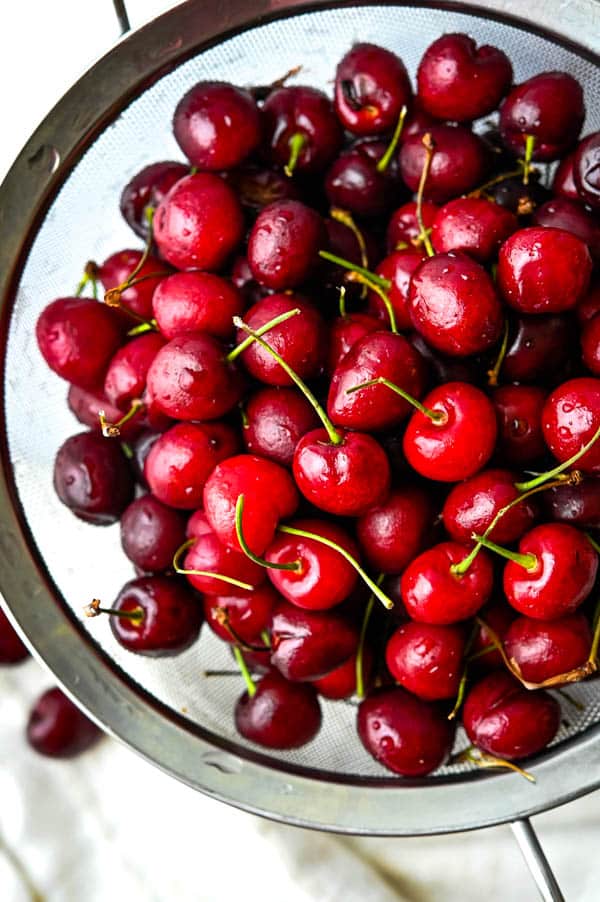 “Outstanding!” That’s how my Dad described these Vanilla Bean Pickled Cherries and I think you’ll agree. They’re unlike anything you’ve tried before,  and this pickled fruit has a complexity you wouldn’t expect.   These babies have a little fire and spice but the vanilla bean softens and rounds the flavors. Their magic is best understood when paired with other foods and they’re so versatile, you’ll always want a jar on hand.

There are multiple varieties of cherries and depending on where you live, you may or may not be able to get them. Rather than sending you on a wild goose hunt for some unattainable fruit, just know that Bing cherries (the default cherry of America) is fine for this pickled fruit recipe. If you have another exotic type that’s local to you, use it. Local produce is always the best! 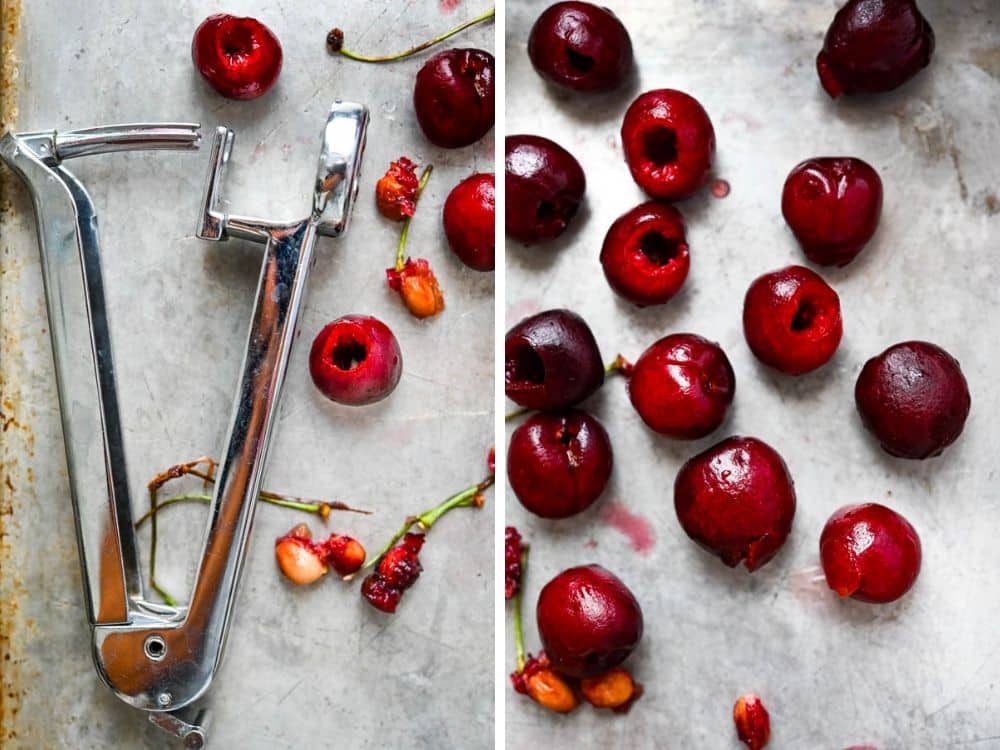 How To Pit Bing Cherries

Whether you have a dearth of cherries or olives, it behooves you to have a cherry pitter on hand. I mean, yes, you could slit a hole in the bottom of the fruit and pry the pit out, however, if you’re working with any type of quantity, that gets old — FAST. I highly recommend a cherry pitter for the job (bonus that you can use it on olives as well to remove stem and pits). This device makes pitting a breeze — but there is one caveat. You’re gonna want an apron — because cherry juice HAPPENS.

(I’ve included an affiliate link for a cherry pitter at the bottom of this post — and it has a shield to protect from splatters.  As you can see {above}, mine doesn’t.) 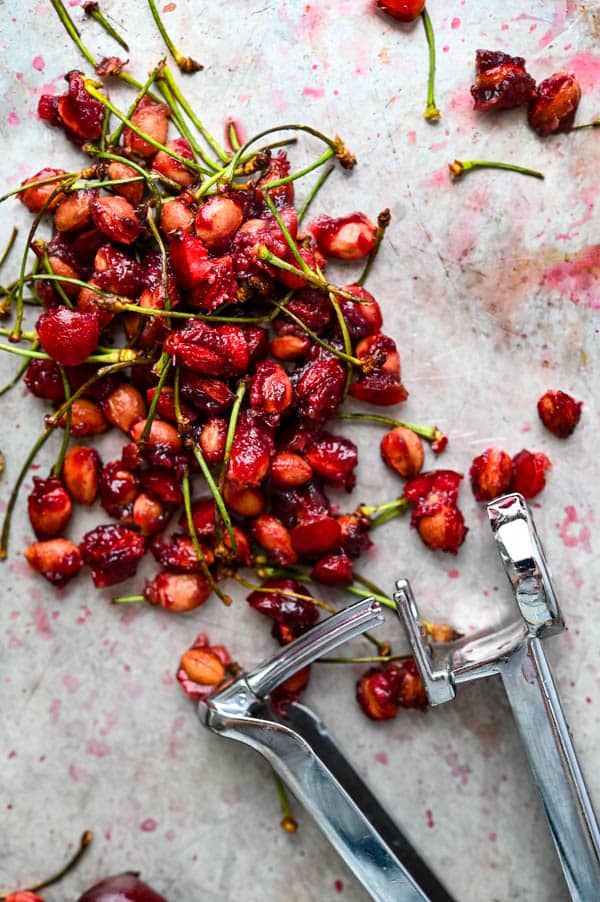 Once the cherries are pitted, make the pickling brine.

Combine all the ingredients into a saucepan and heat (stirring occasionally) until the sugar has dissolved. Continue to simmer the brine for 3-5 minutes. 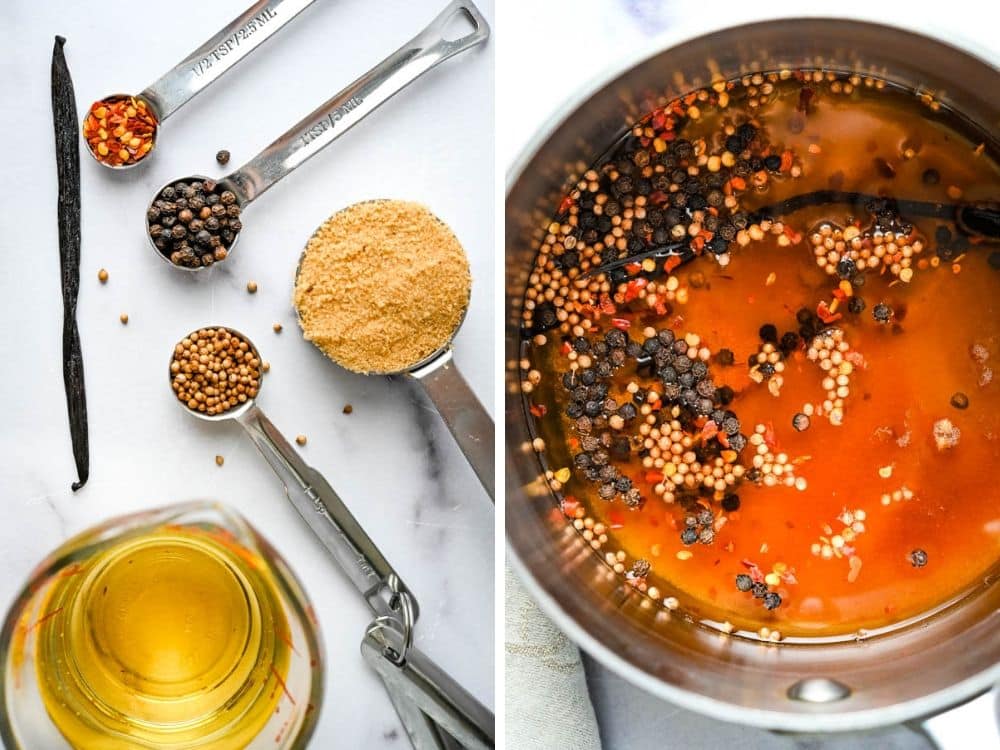 This is an important step that you don’t want to miss, otherwise, you’ll have whole spices clinging and tucked into all the nooks and crannies of your pickled cherries… not very appetizing. 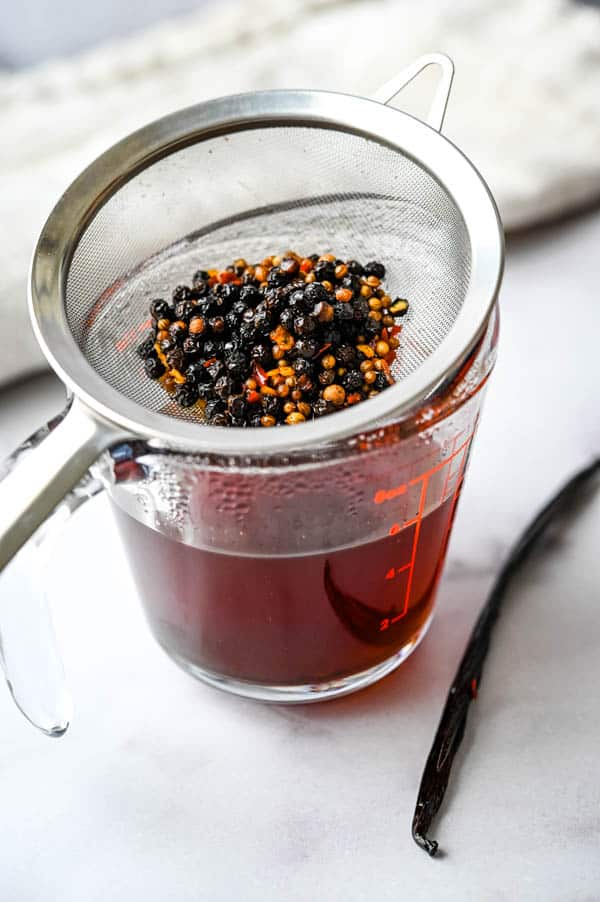 Now it’s time to pickle the fruit. Add the pitted bing cherries to the pot. It might look like there’s more fruit than brine, however, as they simmer, the cherries will begin to collapse, abandoning their rigid structure for a softer, albeit plump one. 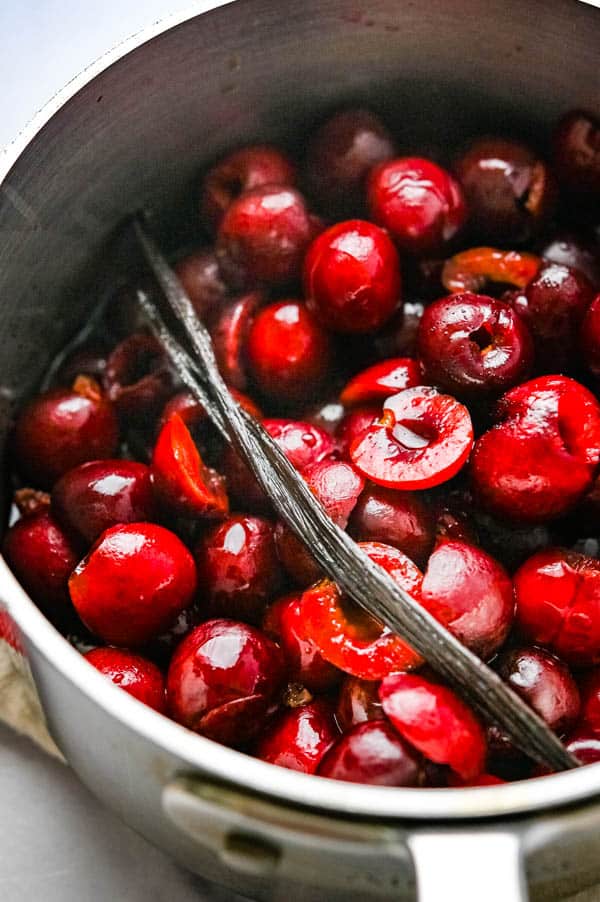 The fruit doesn’t need to simmer long. Only 3-5 minutes will do. When the fruit has slumped and the mixture is fragrant, remove it from the heat. 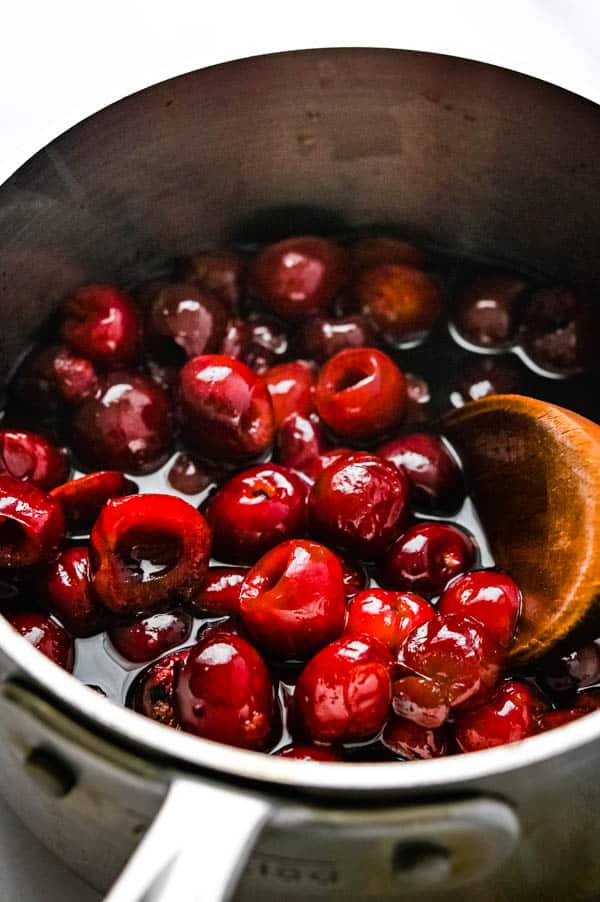 Transfer the pickled bing cherries and the pickling juice to a glass jar with a tight fitting lid. Tuck the vanilla bean into the jar. I used two smaller jars for this batch and I cut the vanilla bean in half, dividing them between the two containers. Store fresh pickled cherries in the refrigerator or use them in this cold rice salad.

Theoretically, Vanilla Bean Pickled Cherries will last in the refrigerator for up to a month, however. you and I both know they don’t stand a chance of surviving past a few days. Enjoy! 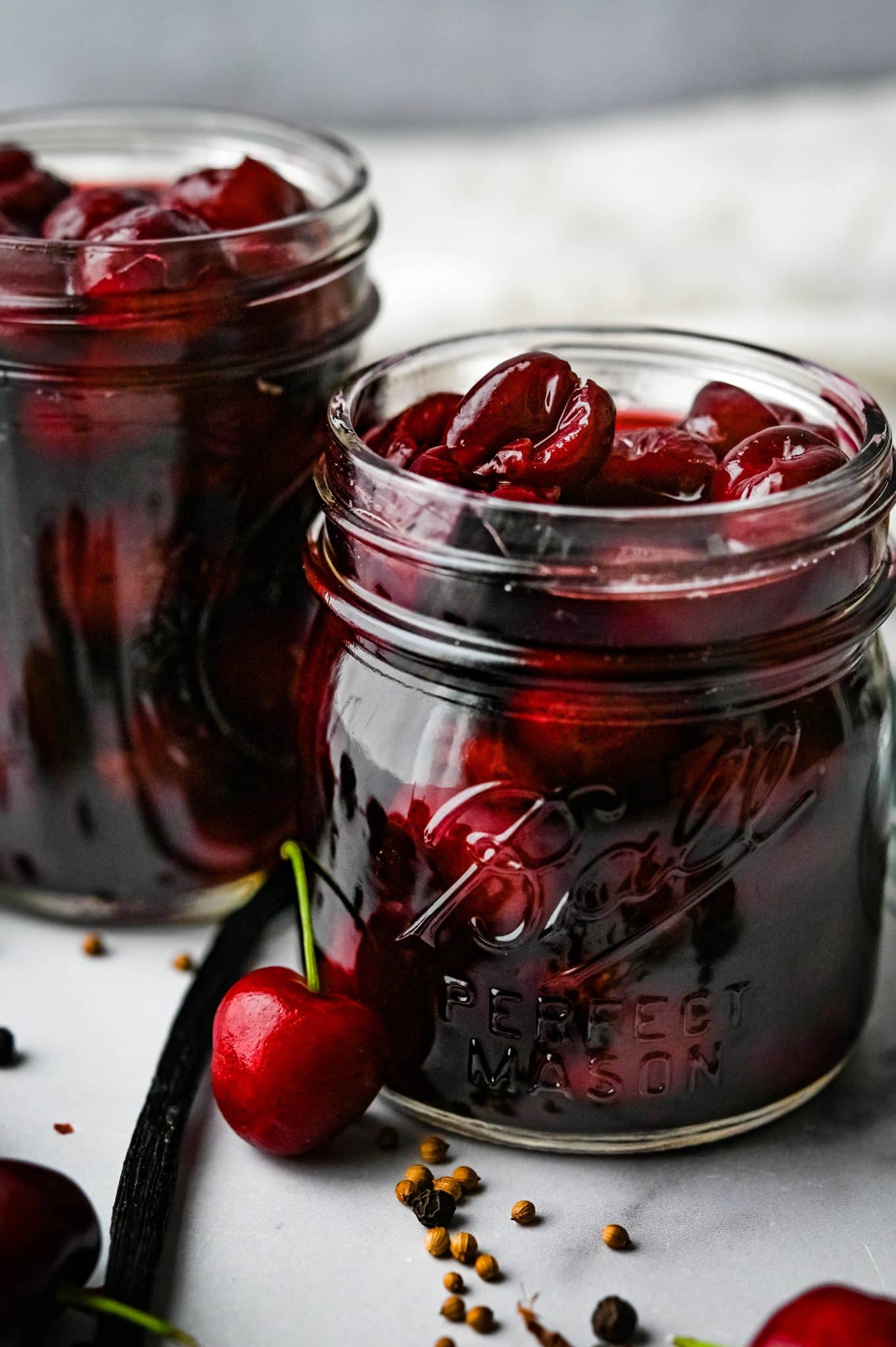 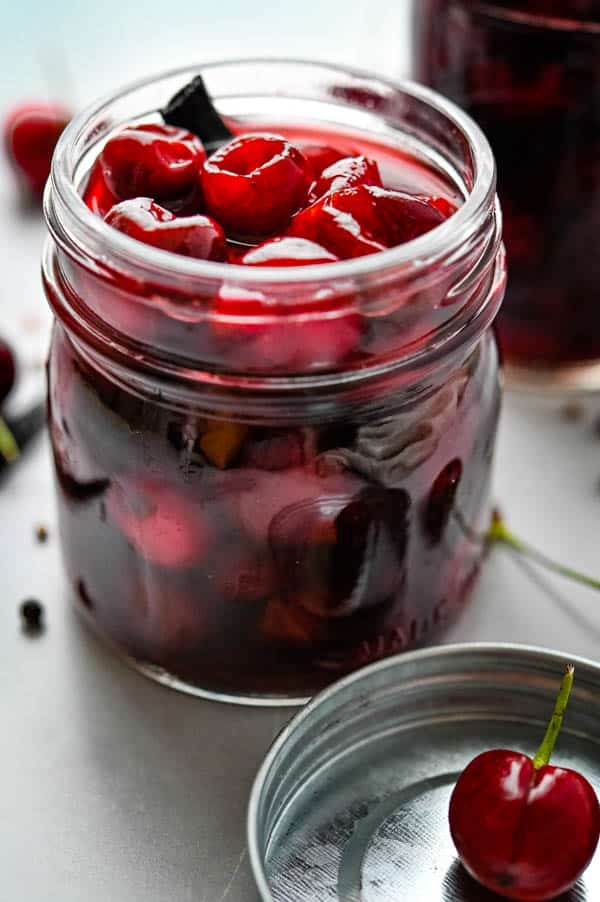 Check out these affiliate links below for tools you may need for this recipe: 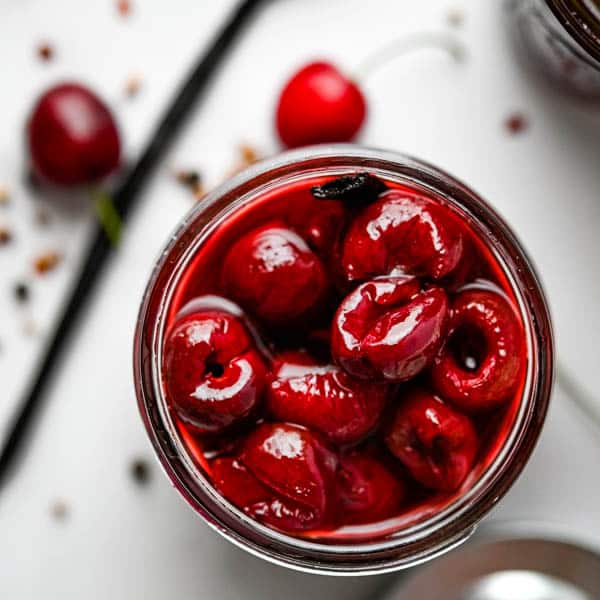 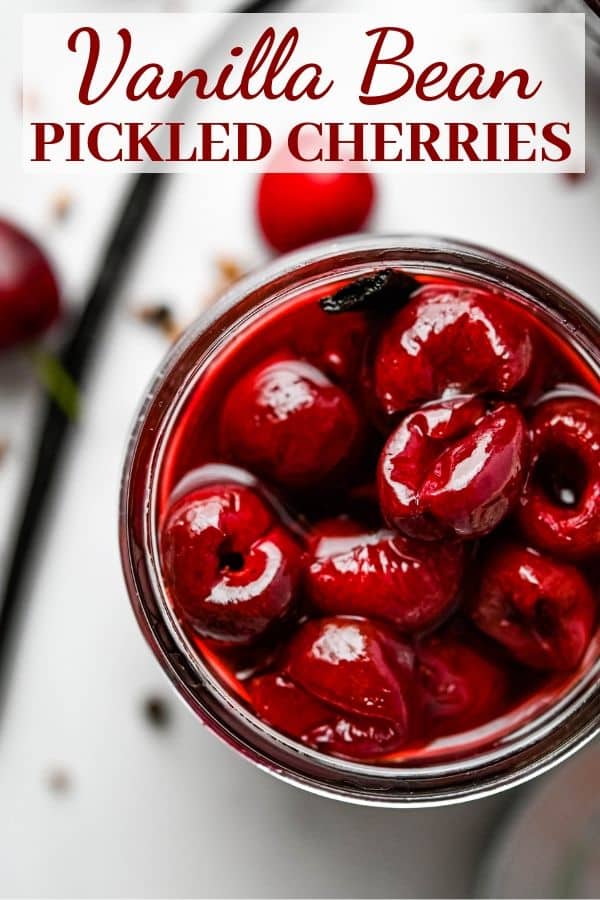