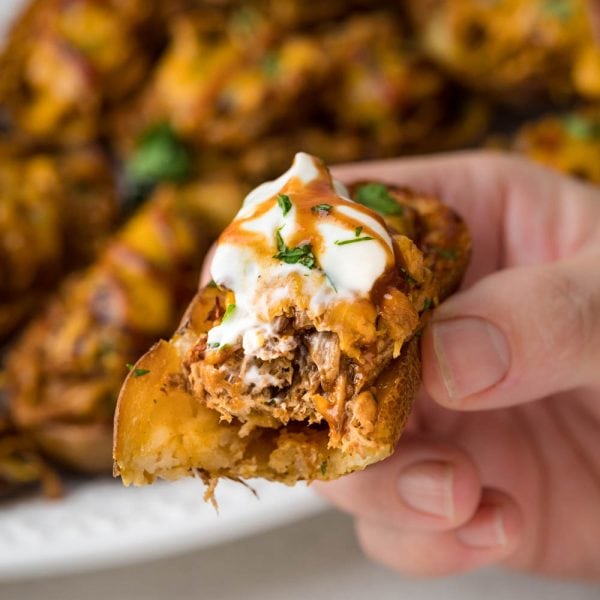 As much as people love football, I’ve never been a fan. However, when the Super Bowl comes around, I can’t deny my family their game day enthusiasm.

So, to make it more interesting (for me) and tasty (for them), our Super Bowl tradition is to make a football party spread that represents the regional flavors of two competing teams.

This year it’s Kansas City vs. Tampa Bay! I shared a recipe for stone crabs with creamy mustard sauce on Wednesday in homage to the Bucs. Today, it’s about the Chiefs.

Since Kansas City was in the Super Bowl last year, too (2020), I’d already highlighted the team with some awesome Kansas City Smoked Spareribs.

Pivoting this year, I’ve got some crispy, tender, Kansas City Pulled Pork stuffed potato skins (a.k.a. PIGSKINS). You heard me. And ooohhhh – are they GOOD!

I came up with this savory spuds idea because crispy, cheesy potato skins are a popular game day snack. As I ruminated on how to make these potato skins special for Kansas City, my husband kept bringing up last year’s Kansas City pork spareribs.

Then it dawned on me… Stuff the potatoes skins with BBQ pulled pork. That just makes sense, doesn’t it?

And, voila — pigskins. Get it? I crack myself up.

This is really a simple potato skins recipe to assemble, especially if you’ve done some of the preparations ahead of time. In fact, I recommend it.

The all purpose Kansas City Rub is ever present in my spice cabinet and only takes 5 minutes to assemble.

My homemade Jim Beam BBQ Sauce is spicy, smoky with a solid shot of bourbon that’s lip-smacking good. It’s ready in about 15 minutes.

The Instant Pot BBQ Pulled Pork Tenderloin recipe is made with both the Kansas City rub and Jim Beam BBQ sauce and it can be made several days ahead, so that when it’s game-time, all you have to do is assemble the stuffed potato skins and bake.

Tips for choosing the best potatoes

To make stuffed potato skins, the spuds first need to be baked whole until they’re tender.

How to bake potatoes

A good stuffed potato skin should be crispy and crackly on the outside and tender and chewy on the inside. Here’s how it starts:

Once the potatoes are baked, they’re ready to be SKINNED.

How to make potato skins

The potato skins will be crispy, tender and ready to be stuffed with BBQ pulled pork.

You could just eat the pulled pork pigskins right from the oven. They’re wonderful with the rich bbq pork tenderloin and sweet smoky Kansas City Rub, but if you want to dress them up, here’s a few ideas:

If you’re having a group of people, set up a potato skins bar with a myriad of toppings, so everyone can pile on their favorites?

Can I make the potato skins recipe in advance?

Yes, you can make the potato skins right up to the point before you stuff them with pulled pork. Keep them covered and refrigerated until you’re ready to assemble. Remove the potato skin shells from the refrigerator about half an hour before you’re going to fill them, so that they can come to room temperature.

Can I freeze potato skins?

Technically, yes. Seal them well in an airtight container. For best flavor, I wouldn’t freeze pulled pork potato skins for more than month.

What can I do with leftovers?

Assuming you have leftovers… One of our favorites is to reheat stuffed potato skins in a 325° oven for 8-10 minutes (add a little extra cheese to get melty and then top them with a fried egg! It’s the ultimate breakfast or brunch!

Scott, my significant other, kept going on about these pulled pork stuffed spuds. He’s right. They’re meaty, unctuous, sweet and smoky with an oozy cheesy finish with each bite. The skins are crispy and chewy and you get a wonderful pulled pork flavor throughout.

I think the Kansas City Chiefs would go ga-ga for these… but they’ve gotta play in the game, so more for us!

If you make this recipe, please take a photo and tag me (@garlicandzest) on social media so I can share it with all of our followers! 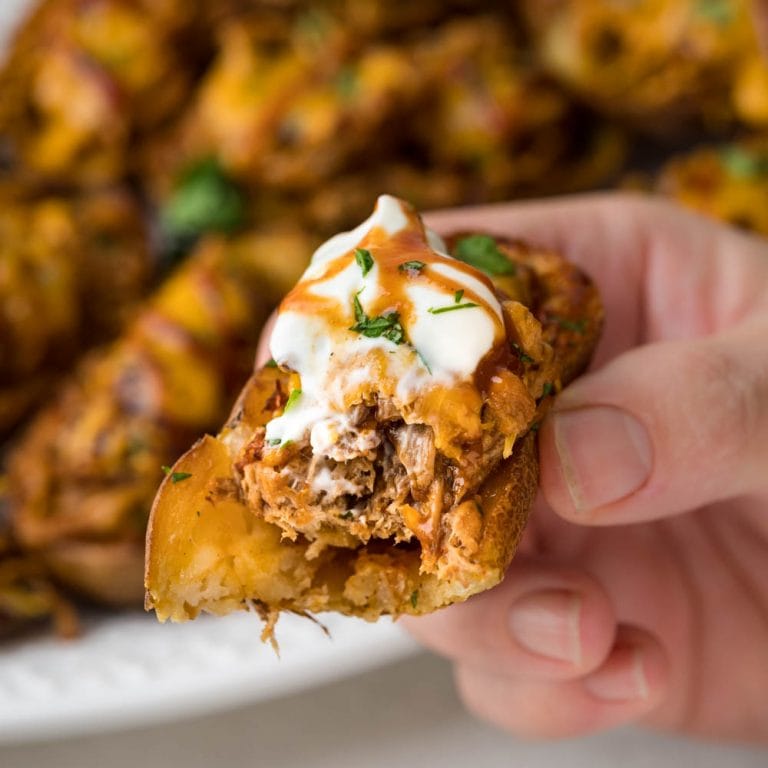