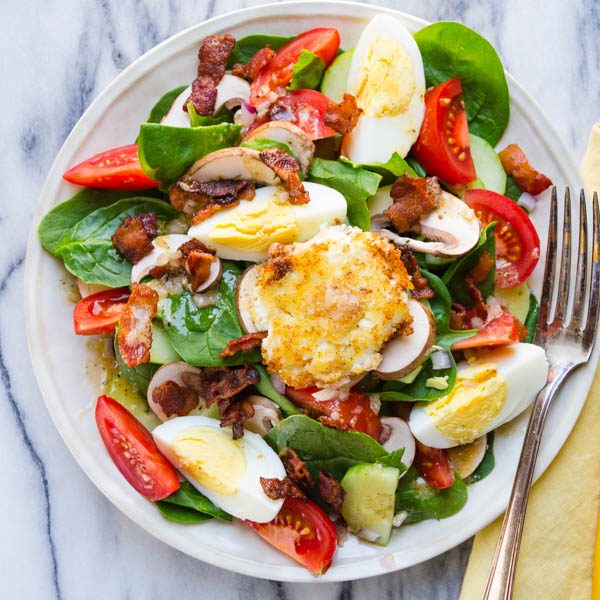 Get out of your salad rut! This Spinach Bacon and Warm Goat Cheese Salad is simple and satisfying. With crispy bacon, fresh mushrooms and hard boiled eggs, this classic spinach salad  has everything you want, including gooey fried chèvre and a tangy bacon vinaigrette. 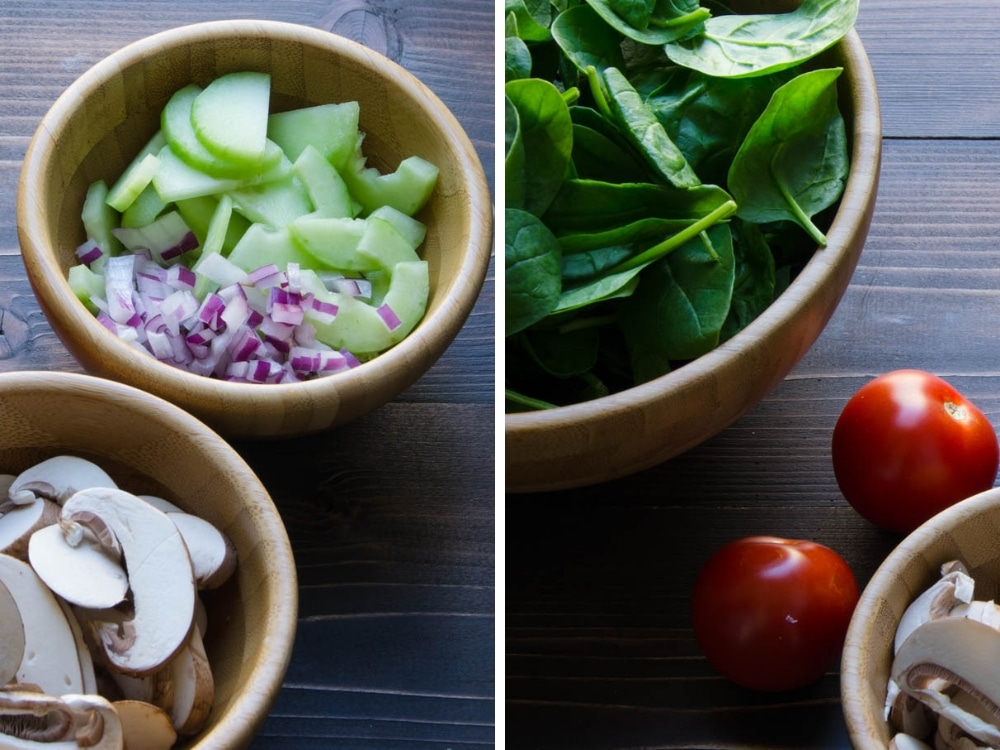 Spinach bacon salad has always been a favorite of mine. I think it was the combination of all my favorite things that made this seem more like a “treat” and less like a “salad.” In this rendition, I’ve included  an easy bacon vinaigrette and my favorite melty, gooey fried chèvre, which is arguably the crowning touch. 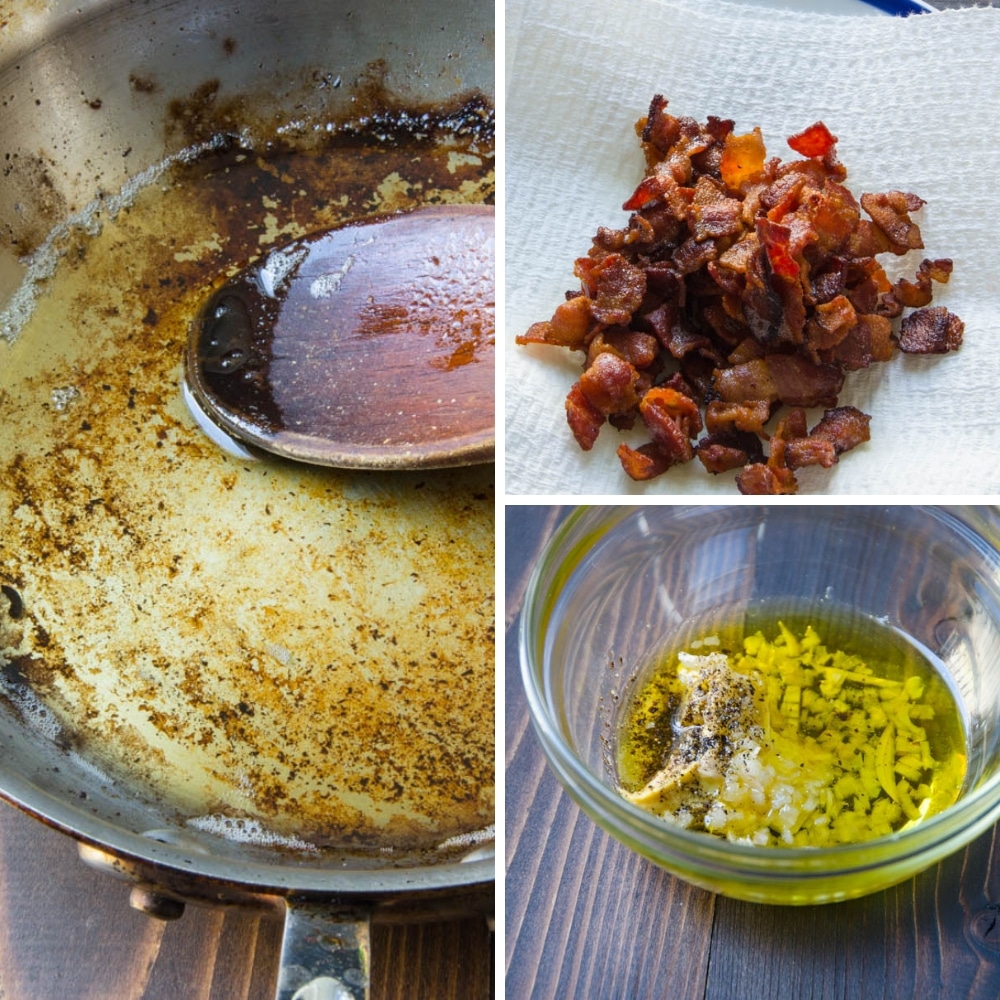 This easy spinach salad dressing, also happens to be one of my favorites. In this version, we replace 2 tablespoons of olive oil with rendered bacon fat, which lends that porky umami to the  standard vinaigrette. It’s not overly fatty, but the drippings emphasize the flavor of bacon that’s also in the salad.

To Make the Bacon Vinaigrette 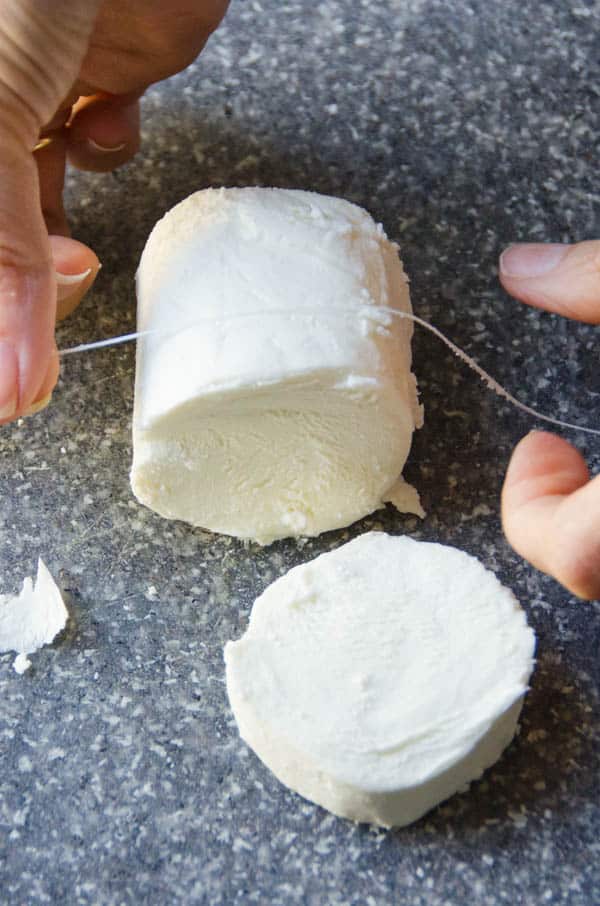 Goat cheese is soft and tends to be crumbly, which can make it a challenge to slice with a knife, especially because remnants will always cling to the knife and never give a truly even cut. I’m not saying this method is perfect, however,  it’s a lot easier than futzing with a cheese knife. 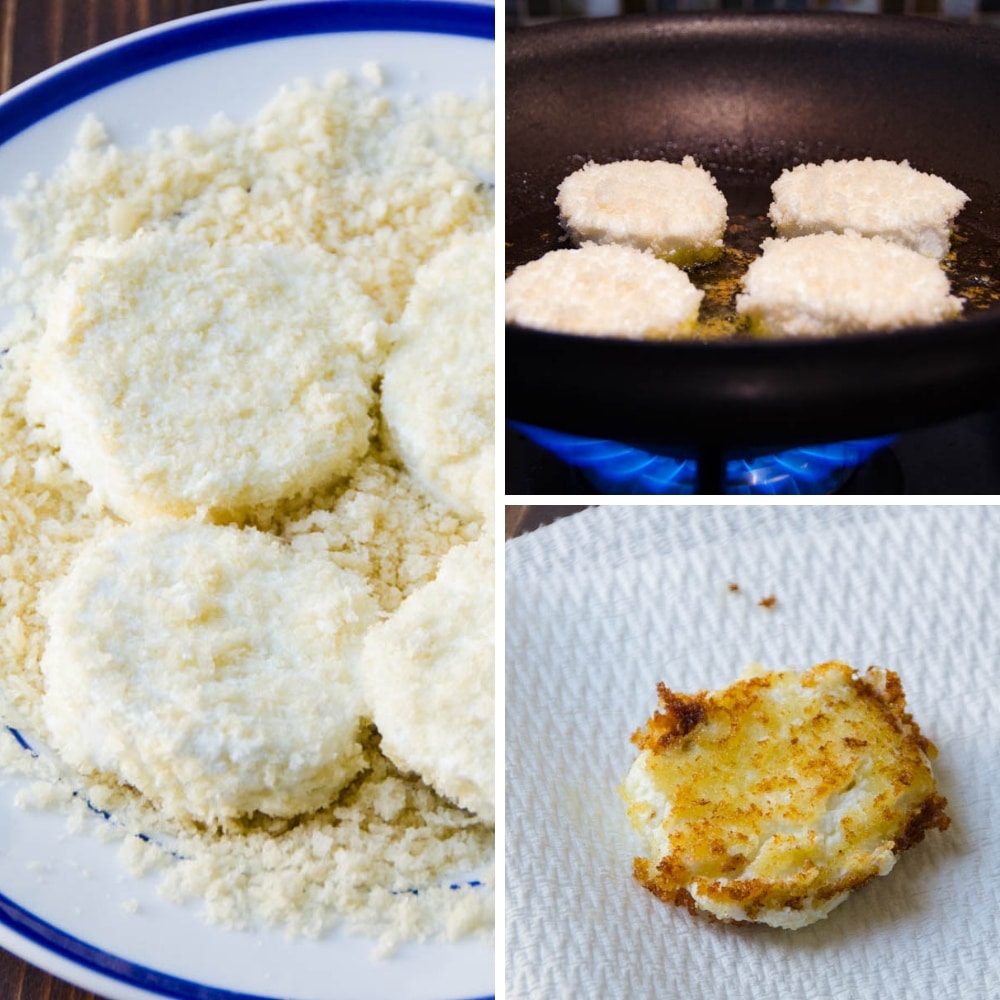 To Make The Fried Chèvre (a.k.a. Goat Cheese) 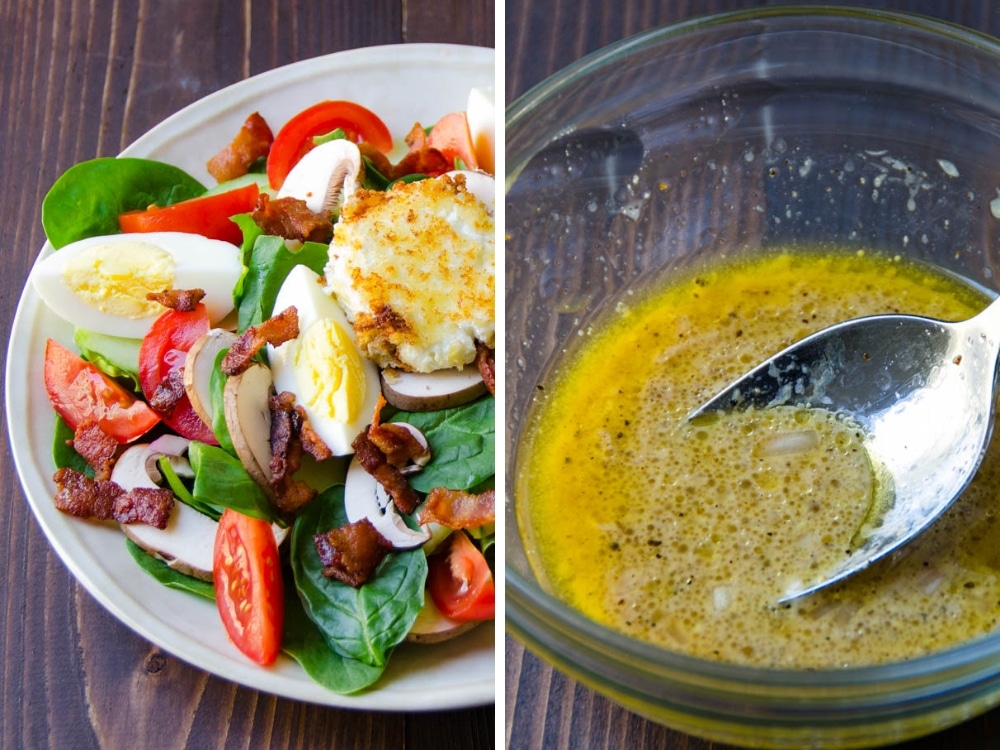 To Assemble The  Spinach Bacon and Warm Goat Cheese Salad

To Serve In A Salad Bowl:

To Serve Spinach Bacon Salad On A Platter or Individual Plates: 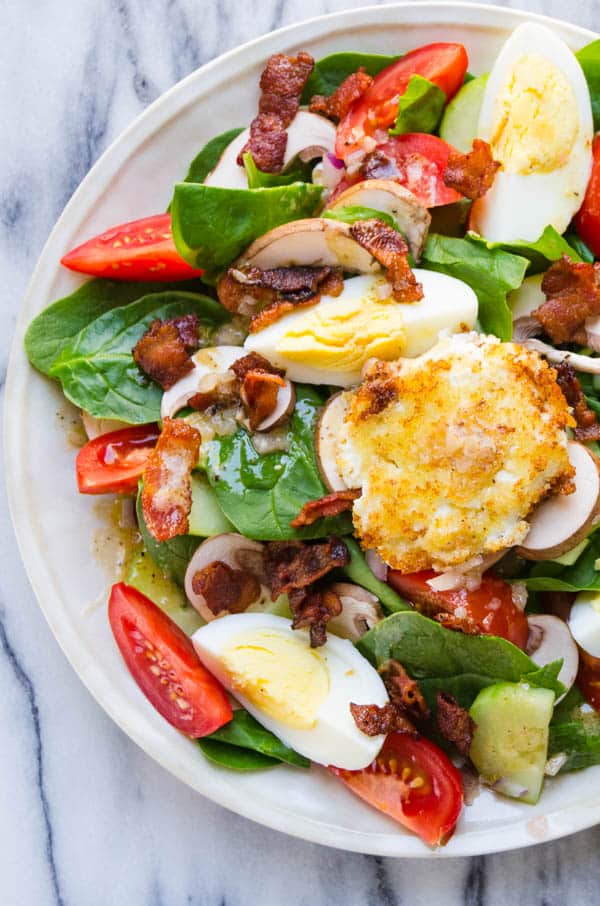 This classic spinach salad is great with a crust of french bread and a chilled glass of sauvignon blanc. I like to smear the warm goat cheese on the bread. If you’re the same way, you may want to make extra! 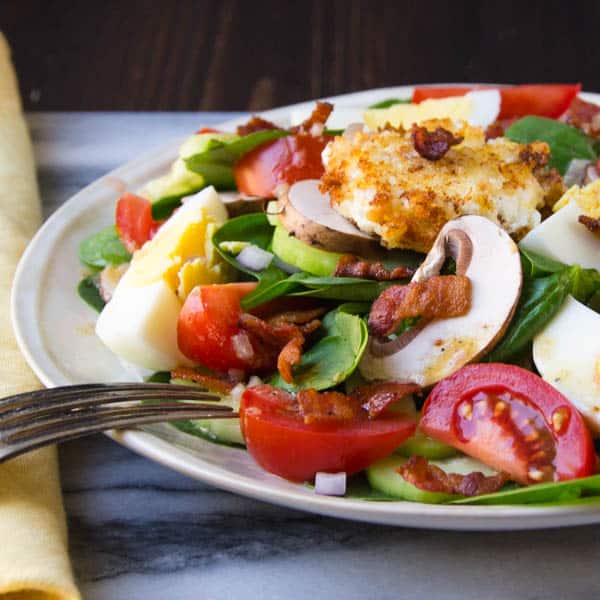 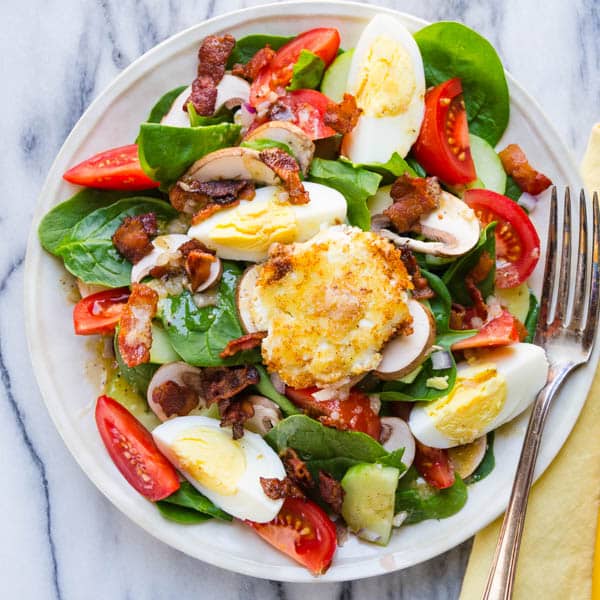 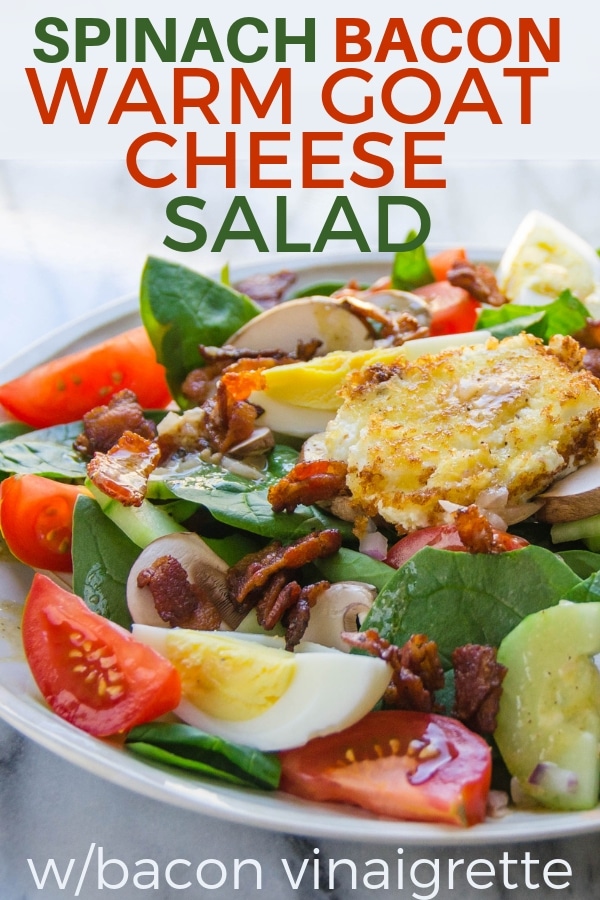 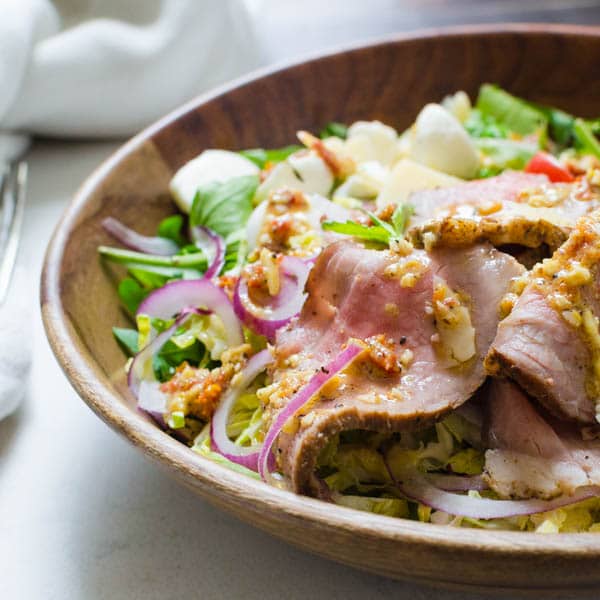 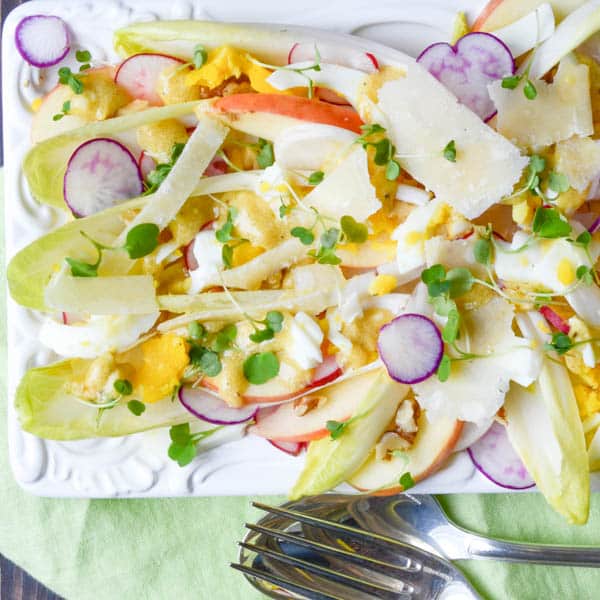 content/uploads/2016/01/Spinach-Salad.png” alt=”This easy recipe for spinach salad includes all your favorites like bacon, fresh mushrooms and tomatoes plus a tangy, melty fried goat cheese round! Find out how to make it!” width=”735″ height=”1102″ class=”aligncenter size-full wp-image-14690″ />
121 shares