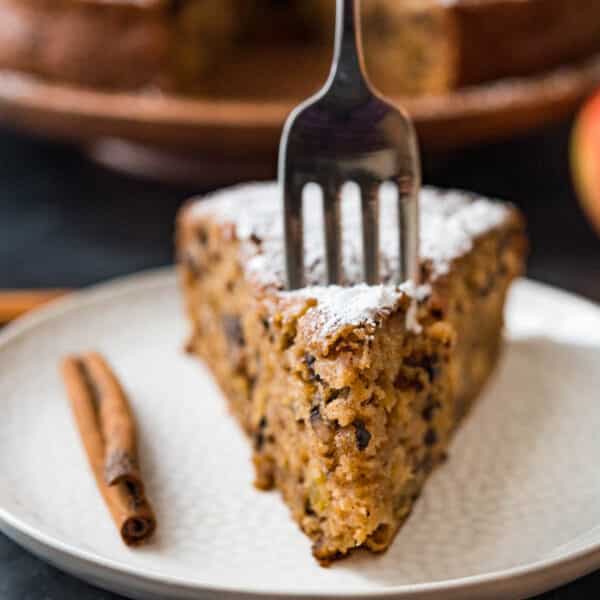 There’s nothing better than a fresh apple cake recipe in the fall and winter months. We love this apple cinnamon cake because it’s quick and easy, mixes up in one bowl, and you don’t need to break out the beaters. It’s loaded with grated apples, golden raisins, toasted walnut, cinnamon, spices, and a splash of rum, and it’s so moist you don’t need to bother with frosting.

Fresh apple cake recipes are an obsession of mine. It started with my grandmother’s homemade apple sauce, which became her applesauce snack cake. From there, it morphed into applesauce muffins, then an apple bundt cake (with maple glaze). So many treats, so little time…

This apple spice cake is a simple single-layer cake that’s super moist, dense with fruit and nuts, and richly spiced with cinnamon, nutmeg, cloves, and allspice.

The flavors of this harvest cake remind us of the fall farmers’ markets with baskets of every type of apple imaginable and heady cinnamon-spiced apple cider.

I’d liken this apple cinnamon cake to a fruit cake more than a regular layer cake, though it’s not that dense. (And I’d recommend eating it within a few days rather than holding on to it for several months.)

I’ve found this easy apple cake recipe works well with most types of apples. We’ve made it with Granny Smiths, Gala, Fuji, Honeycrisp, and Jonagold to excellent results. You could also use Cortland, Braeburn, or Jazz apples.

How to prep apples:

Most fresh apple cake recipes chop or slice the apples, but this one uses grated apples so that the bits of fruit become part of the crumb of the cake.

It’s one of the reasons that this cake has a compact, even look without the typical domed center. The grated apple makes this cinnamon-scented cake super moist and gives it a satisfying chew. It’s got more heft than a melt-in-your-mouth type of bake.

How to make apple cinnamon cake:

Isn’t that easy? Just mix and bake. As a self-proclaimed “lazy baker,” I love the no-fuss nature of this simple cake.

You don’t need a pastry degree from Le Cordon Bleu to make it- and because it’s an all-in-one dessert with no special frosting required, you don’t even need to break out the offset spatula or piping tips.

This cake is so moist and dense that you’ll want to ensure it pops out of the pan easily.

My recommendation is to cut a piece of parchment paper the size of your cake pan, spray the pan with vegetable spray, place the parchment in the bottom and spray it again. This will ensure that the cake doesn’t stick.

When you turn out the cake to cool, just peel the parchment off. Easy peasy.

I know, this cake doesn’t look like much. It’s just a simple, but richly flavorful apple spice cake loaded with fruit, walnuts, and plenty of cinnamon flavors. And it’s so good; you’ll want to make it again and again.

Can I make the apple cinnamon cake in advance?

Yes. Make it a day or even two in advance. The cake gets moister as it rests.

Can I freeze the fresh apple cake?

Yes. This recipe is well suited to freezing. Just make sure your cake is well wrapped (I like two layers, the first plastic wrap and then freezer paper). It will freeze well for up to two months.

What if I want to add frosting?

If you want to, I recommend either this cream cheese frosting or this light, fluffy, and not-too-sweet ermine icing.

What to serve with cinnamon apple cake

A sprinkle of powdered sugar is all you need, but if you really want to dress it up, here are a few suggestions: 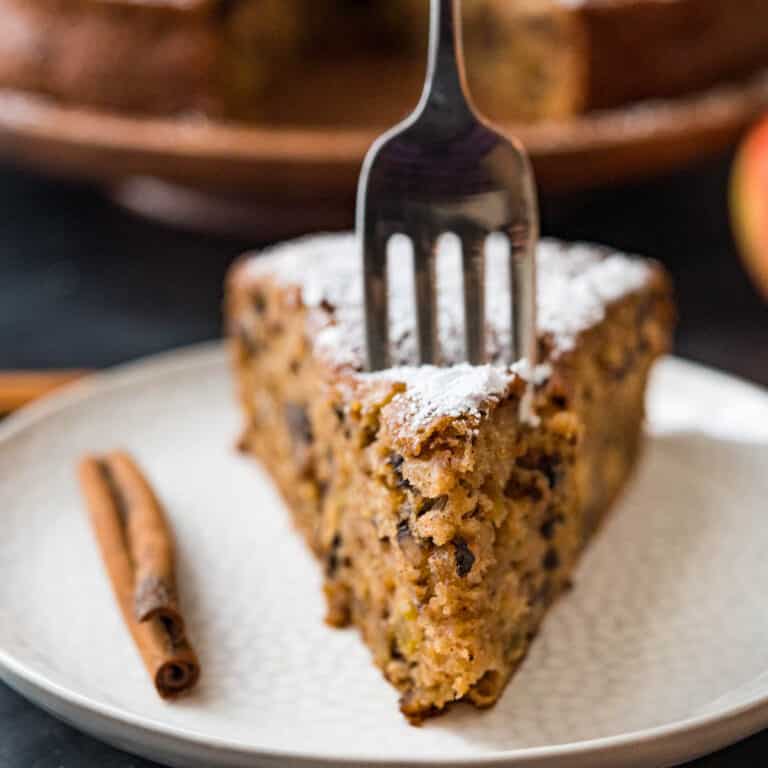