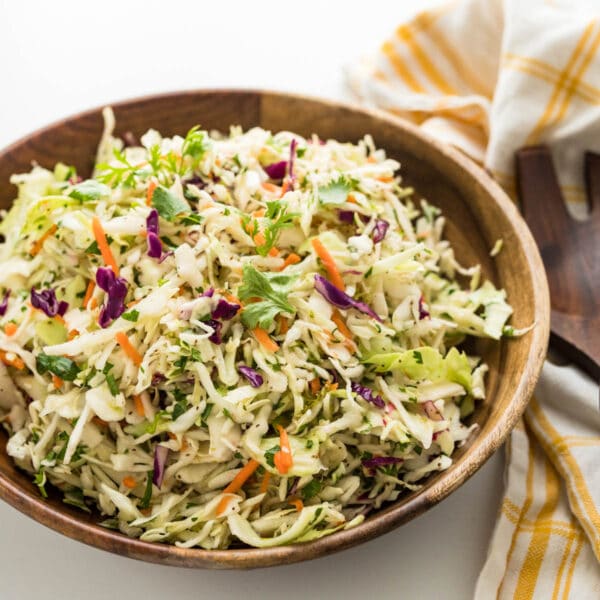 This quick and easy coleslaw recipe has no mayo and uses packaged slaw mix, fresh cilantro, lime zest and juice. Use this tangy cilantro lime slaw for fish tacos, topping pulled pork sandwiches or make it as healthy side dish for cookouts and barbecues. I’ve been making this no mayo coleslaw recipe for years and it’s always a hit.

This easy slaw is way better than deli coleslaw!

Coleslaw (or some variation of it) has been around since the Roman times. Bet you didn’t know that. And though it’s developed passed its early origins, it’s still essentially a cabbage salad. And there’s good ones and not so good ones (I’m looking at you deli coleslaw).

This recipe is far from those sad, soupy, mayonnaise based wannabes in the plastic containers at the supermarket. It’s bright, fresh, crisp and tangy. Best of all, you can make it in about 5 minutes and THIS mayo-free slaw recipe uses bagged coleslaw mix.

Personally, I love a good slaw and make variations on this salad all the time. My Southern coleslaw recipe is a traditional tangy, cabbage slaw with mayonnaise dressing. This crunchy cabbage, apple and fennel slaw is great to cut through the richness of smoked meats.

And today’s quick, no mayo slaw is easy to make and perfect for last minute meals. We love it with lots of dishes and it’s an especially good slaw for fish tacos because it’s light, crunchy and tangy and adds tons of flavor.

How to make quick slaw for fish tacos and more

Start by making the no mayo dressing for the coleslaw, then toss with the packaged slaw mix to combine.

Is coleslaw with no mayo healthy?

Because the cilantro lime slaw doesn’t have mayo, you’ll save on excess fat, right off the bat. It’s low in calories, carbohydrates and sugars, but this cilantro lime slaw recipe is packed with flavor. It’s tangy and bright, crunchy and irresistible.

Can I make cilantro lime slaw ahead of time?

You can make the dressing ahead of time and mix it at the last minute. It’s really best during the first hour or so that it’s made. The slaw will become softer and less crunchy the longer it sits.

Up to a day. After that, the no mayo slaw can get soggy.

Can I use the slaw for more than fish tacos?

Definitely! Add it as a garnish to any type of taco or use as a side dish for any grilled or barbecued meats and seafood.

I mentioned that I’ve been making this no mayo slaw for years, and my family has been asking me (for years) to put it on the blog.

I never did, because it didn’t feel like a recipe to me. Just a quick and easy side dish that didn’t take any effort. Then I thought — that’s exactly the kind of thing you want.

This is a simple, convenient mayonnaise free coleslaw recipe with flavors and textures that really pop. It’s bright and tangy, lightly sweet and irresistible.

Flavor-wise, we love this crunchy slaw without mayo because of the fresh, light tangy lime and herbal cilantro. You can really taste it because it’s not being weighed down by a heavy dressing.

Convenience-wise, it’s the quickest and easiest slaw recipe because you don’t have to chop any of the vegetables. Just use your favorite packaged coleslaw mix and make your own no mayo dressing in minutes.

You’ll also like this because it makes a finite amount — just enough for a backyard cookout — and you won’t have half a head of cabbage floating around in your crisper drawer for the next week, daring you to make something with it.

We’ve already covered the fact that you’ll want this slaw for fish tacos, but it goes with much more. Try this recipe with: 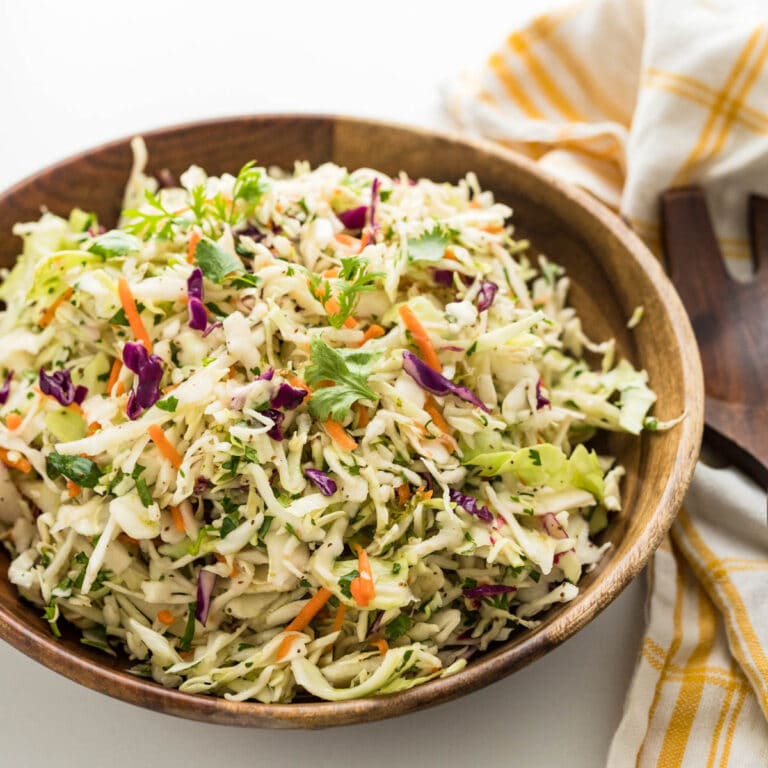