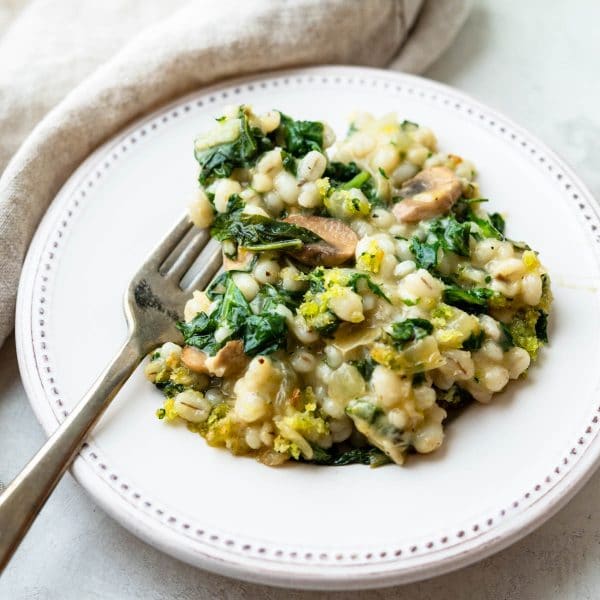 This easy, cheesy kale mushroom casserole is healthier than the standard gratin because it replaces pasta with nutritious, wholesome pearl barley. This simple gratin is a delicious vegetarian casserole with a rich, satisfying flavor and chew. The light gruyere cheese sauce ties the greens and button mushrooms to the kale for a creamy, lush taste. Makes a great side dish or vegetarian main course.

My first memory of barley was in my Grandmother’s beef barley soup. It was thick and hearty with a savory broth and tons of chewy pearl barley.

I loved it so much I came up with a vegan mushroom barley soup for variation and my favorite ham and vegetable soup with barley and fresh herb pistou.

If you think barley is relegated strictly to soups, it’s not. Try it in this hearty vegan kale and barley chopped salad or today’s recipe, a rich mushroom kale and barley au gratin casserole. It’s rich, meaty (though there’s no meat in it) and satisfying. This kale and mushroom casserole makes a delicious side dish or vegetarian main course.

What is pearl barley?

Barley is an ancient cereal grain with a mild flavor and toothsome texture. It comes hulled, hull-less, pearled, flaked or even in barley grits.

Hulled and hull-less barley are the most nutritious types of barley with the hulled variety only having the inedible outer hull removed.

Hull-less barley has the bran and germ intact and is still considered a whole grain.

Pearl barley is more processed with the bran layers removed and thus, slightly less nutritious, however, it takes less time to cook and still has more nutritive benefits than other more highly processed grains.

Barley expands nearly 3 times when cooked, so one cup of dry pearl barley will yield about 3 cups of cooked barley.

If you’re a barley fan, I recommend making a double batch and storing the excess in the refrigerator for up to 5 days to use in soups, stews or salads. (You’re more likely to reach for this wholesome ancient grain if it’s already cooked.

When cooked, pearl barley has a kind of soft, velvety texture that gives this ancient grain a unique mouth feel.

There’s also a simple parmesan breadcrumb topping that adds a golden crunchy crust, but you can also use panko if it’s more convenient.

I recommend cooking the vegetables in two stages with the mushrooms garlic and thyme first and the onions and kale second as they will cook at different rates and in order to coax the best texture and flavor from the mushrooms and kale cook them in batches. Here’s how:

How to cook the vegetables for the gratin

Cheese sauce for the barley and mushroom casserole

You can use the same skillet to make the cheese sauce for the casserole, no need to rinse or clean it. You’re welcome…

This sauce is similar to a traditional velouté, but made lighter because it doesn’t contain cream or egg yolks the way the classic recipe calls for. Broth blended with the roux makes the sauce lighter, but with the same creamy mouth feel.

To keep it vegetarian, use a vegetable broth like this one made from kitchen scraps or a low-sodium store-bought variety (you can also use chicken broth).

How to make cheese sauce for the kale mushroom casserole

Now that all the components are cooked, it’s time to assemble the whole grain kale and mushroom casserole. Add the cooked barley, and vegetables to the cheese sauce and stir until the mixture is well combined, then transfer to a 1 quart baking dish.

To be honest, you don’t have to bake this mushroom and barley gratin as a casserole, especially if you’re pressed for time.

Instead, serve the mushroom and barley gratin straight from the skillet as a sort of barley risotto. Its absolutely delicious as it puddles on your plate.

However, if the idea of a bubbly center and crunchy golden crust appeals to you, then go for it. You can make it in about 2 minutes with a mini food processor.

Just add pieces of torn sourdough bread, a little butter, grated parmesan cheese and fresh parsley to a mini prep processor and pulse until fine crumbs form. Sprinkle the cheesy breadcrumb topping evenly over the casserole and bake until the kale barley and mushroom gratin is bubbly and hot and the breadcrumbs are browned and crisp.

This is like a sophisticated mac and cheese without the mac. In fact, my tasters liked it BETTER. The barley is tender with a nice chew and the mushrooms give the casserole a meaty texture and flavor. The kale isn’t a predominant flavor, but the beautiful ribbons of toothsome greens add a visual appeal.

I have to say, though, it’s the cheese sauce that MAKES this tempting side dish. It’s rich and luxurious. The hint of vermouth plays well with the Gruyere elevating this simple barley side dish to a completely different level.

My tasters kept going back for spoonful after spoonful because it’s just THAT GOOD.

What to serve with mushroom and barley casserole

You can enjoy this gratin with anything you’d normally serve potatoes with. It’s very versatile and compliments most meats and seafood. It’s also hearty enough to enjoy as a vegetarian main course with a simple green salad.

Try this as a side dish with:

This tasty gratin is endlessly customizable. Here are just a few options:

Can I make the kale mushroom and barley casserole in advance?

You can, but it’s much better when freshly assembled as the kale greens will stay more vibrant and chewy.

How do I reheat the leftovers of this vegetarian casserole?

This vegetarian casserole reheats well in the microwave or in a low oven (325° F) for 15-20 minutes. 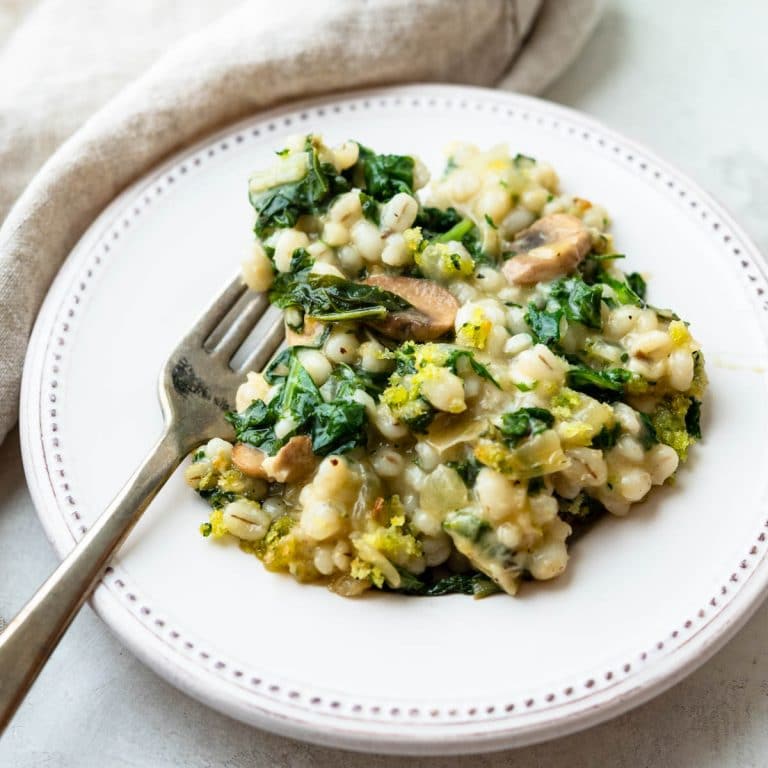 FOR THE BARLEY MUSHROOM BAKE:

FOR THE CRUMB TOPPING: