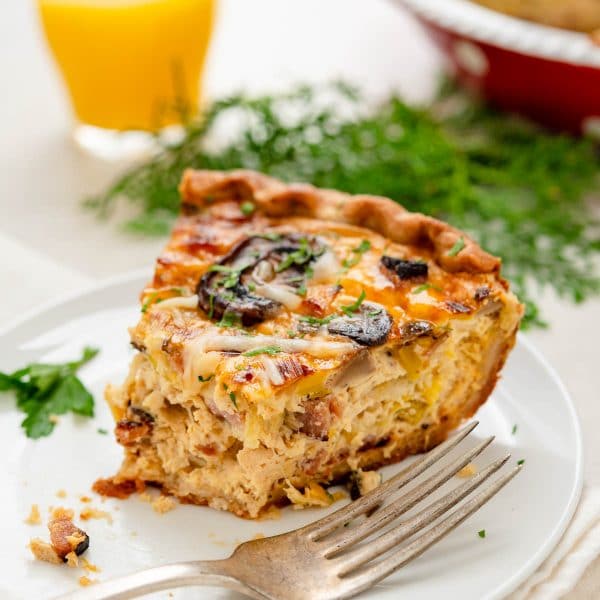 Want a savory, indulgent ham quiche recipe that’s loaded with cheese, veggies and is perfect for entertaining? This is it. Ham Leek Mushroom quiche is made with fresh eggs, milk and half and half with gruyere cheese and a flaky pie crust. Best of all, it can be made ahead of time and reheated at the last minute, so it’s perfect for weekend brunches or holidays like Christmas and Easter.

Quiche is great for entertaining

When I’m planning a menu for a festive brunch or holiday gathering, I always look for recipes that let me do most of the work ahead of time, so I’m not slaving in the kitchen while everyone else is having fun.

Quiche is at the top of that list and I’ve got quite a few recipes to choose from.

From this popular broccoli bacon and cheese quiche, to this easy kale and mushroom quiche, veggie-centric ratatouille quiche, my luscious caramelized onion and thyme version, or this special crab quiche that I made for my parent’s anniversary.

Spinach artichoke quiche is like your favorite appetizer in breakfast form, loaded baked potato quiche is filled with chunks of potato and toppings and tomato, bacon and onion quiche makes enough for two pies. Phew! That’s a lot of quiche!

This new ham mushroom and leek quiche is chock full of tasty tidbits that my tasters LOVED.

Ham mushroom and leek quiche is loaded with flavor

Sound good? I thought so too.

What is quiche exactly?

Essentially a quiche is a savory egg custard baked in a flaky pastry. They can be simple, using ready made pie crust or a little more fancy with your own homemade pastry. Some quiche recipes skip the pie shell altogether, to keep the recipe a little healthier.

All quiche fillings start with eggs, milk, half and half or cream and grated cheese. Other ingredients can include countless vegetables (we’re using mushrooms and leeks), herbs, spices, meat (this one has ham and pancetta)or seafood.

The key is that any vegetables or meats generally need to be cooked before adding to the custard. Beyond that, anything goes with quiche.

Back in the early 1980s, Bruce Feirstein took a satyrical look at male masculinity and declared that “Real Men Don’t Eat Quiche”.

Of course, the beer-swilling, flannel-wearing, crotch-scratching men who saw the title (but didn’t actually read the piece originally written for Playboy magazine) took up that “real men” banner and waved it proudly.

Consequently, the flaky egg, meat and cheese filled pastry took a serious popularity hit for at least a decade.

Emerging from the dark ages…

Happily, guys have (mostly) gotten over their aversion. I mean some of the most popular quiches have BACON in them. What’s more masculine that smoked pig?

As testament to this statement, I’d like to offer my Dad, uncle, grandfather and husband as examples.

Each have been bonafide taste-testers for the multitude of quiche recipes I’ve made throughout the years. They enjoyed all of them — and not one had to relinquish their man-card for saying so.

Making quiche isn’t hard to do, but it does take a bit of time, as each of the ingredients needs to be pre-cooked before combining them with the custard.

Why? Despite being baked in the quiche custard, vegetables won’t naturally get tender. The mushrooms would be rubbery, the leeks would be crunchy — and their full flavor potential wouldn’t be met if you didn’t sauté them first.

Sauteing the vegetables individually will bring out their sweetness or savoriness. The same holds for the pancetta and ham. A quick sauté in a hot skillet will make them crispy and even more porki-licious.

How to make the Christmas quiche filling

Assembling the quiche takes 30-40 minutes of hands-on time and usually a little more than an hour to bake. For me that’s too long to have it for breakfast the same day (same reason I don’t make yeast doughnuts for breakfast — I’d have to get up at 4 in the morning), but I have no problem making a quiche a day or two before and reheating it when I’m ready.

Plus, you can assemble the this ham and leek quiche in stages over several days. I like that.

There are two methods I use to tell whether a quiche is cooked completely.

As I mentioned above, you can make quiche with just about anything, so if you’re missing one or two ingredients, don’t feel like you can’t make this recipe. Just make a few swaps or variations based on what you have in your larder.

Just try to keep the amounts of each ingredient around the same as I’ve listed in the recipe card.

My husband, Scott, LOVED this ham mushroom and leek quiche and unabashedly went back for another serving.

He enjoyed the bits of porky ham and salty pancetta as well as the double dose of mushrooms, which gives this quiche recipe a woodsy, meaty quality. Soft, sweet leeks and nutty gruyere cheese balance the savory flavors.

What the tasters said about the Christmas quiche:

How do I reheat the ham, mushroom leek quiche to serve?

To reheat the quiche, remove it from the refrigerator about 30 minutes before heating to take the chill off. Reheat, covered in a warm (300°F) oven for 25-30 minutes the next morning. This will bring the ham mushroom and leek quiche to a good temperature for serving without continue to cook the egg custard.

How long will the quiche keep in the refrigerator?

For the best flavor, I’d serve it within the first 3 days of baking, though leftovers will hold up for 5 days.

Can I freeze the Christmas quiche?

Yes. After baking, let the quiche cool to room temperature. Wrap it very well in plastic wrap and freezer paper and freeze for up to one month. Defrost completely before reheating.

What to serve with ham mushroom and leek quiche:

Quiche is appropriate for any meal of the day, so what to serve with it, depends on what time of day you’re eating.

Ham and leek quiche for breakfast:

Serving the quiche for brunch:

Ham mushroom and leek quiche for lunch or dinner: 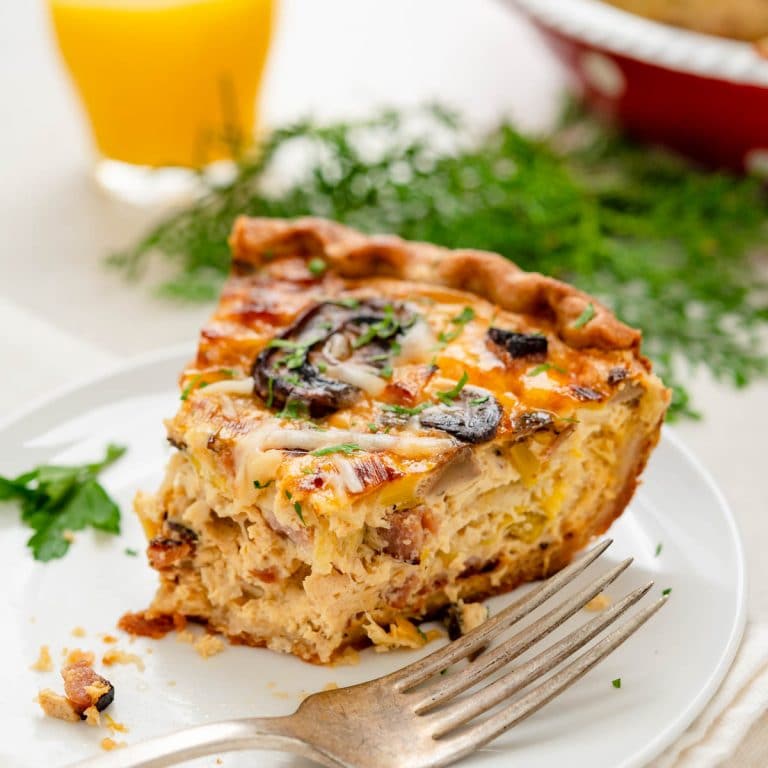 HEAT THE OVEN AND PREPARE THE CRUST:

FOR MAKE AHEAD QUICHE: